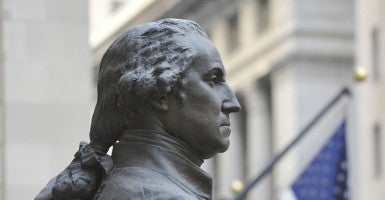 What’s so great about George Washington?

I don’t mean this as a rhetorical question, implying that Washington really was not great—as such a question might be intended by many modern scholarly debunkers of great men. I intend it, rather, as a real question from which we can gain some valuable insight: what exactly made George Washington great? What was it about him that makes him one of the greatest American presidents and perhaps even the greatest?

It is altogether fitting and proper to ask this question on the anniversary of Washington’s birth. By asking and answering it, we do justice to him and do good for ourselves. Exploring the question does justice to Washington because it compels us to honor him intelligently.

Honor is what we owe him, but the honor is empty, and therefore the debt is really left unpaid, if we do not try to reflect on his virtues. At the same time, exploring the question does good to ourselves because it compels us to admire him intelligently, such that we might hope to imitate his virtues and therefore make more secure the political order that he and the other founders gave to us.

Those who admire the founding generation—whose numbers thankfully still outstrip the debunkers—sometimes speak of them as a generation of geniuses. The word genius is overused and thus undervalued these days, but it is probably not inappropriate to apply it to many of the American founders. At least we can say without exaggeration that it is very, very rare for the affairs of a nation to be in the hands of men who were both able statesmen and rigorous political thinkers—men like Alexander Hamilton, James Madison, Thomas Jefferson and John Adams.

Washington stands out, even among the founders, for the greatness of his character. Indeed, for that reason, he was a better president than any of them were or probably could have been.

Here we encounter a kind of paradox. We are apt to praise the founders for their genius, yet the greatest man among the founders, the indispensable man, was remarkable in a different way. George Washington was certainly an intelligent man who had understood and reflected on the natural rights doctrine that informed the founding. He was clearly an astute observer of American politics who came to understand sooner than some that the government created by the Articles of Confederation was incompetent to preserve the Union and so would have to be replaced by something better. But his greatest virtues lay outside the theoretical realm.

What, then, made Washington the greatest man of this great generation? It was his character. George Washington stands out, even among men of the caliber of the founders, for the greatness of his character. Indeed, for that reason, he was a better president than any of them were or probably could have been. For example, for all of his stupendous mental energy, Alexander Hamilton was somewhat wild and politically impulsive when he was not under Washington’s influence. For all of their genuine commitment to the nation’s new government, Thomas Jefferson and James Madison at first insisted on an unrealistically narrow interpretation of its powers from which they later had to backtrack. For all of his sincere patriotism and powerful intelligence, John Adams was irascible and could not get along with his own cabinet.

These men showed repeatedly that they were capable of making mistakes that Washington would never make. This means that in the decisive sense he was the better statesman, the one who could more safely be entrusted with the nation’s care.

He was better because of his character—specifically, his self-command, which prevented his ever taking any political step on impulse, without carefully weighing its consequences for the country. The missteps of these other great men have a common root: undisciplined passion, whether a personal passion, like pride, or an intellectual passion, like prideful attachment to one’s own theoretical opinions about government, unqualified by a practical attention to the country’s needs.

George Washington had trained himself from young manhood in the discipline of his passions. They were always well-governed, and this made him uniquely qualified to govern others, even when compared with the intellectual luminaries of that intellectually luminous generation.