There Is Growing Evidence Noncitizens Are Voting. Why Isn’t the Government Doing Anything? 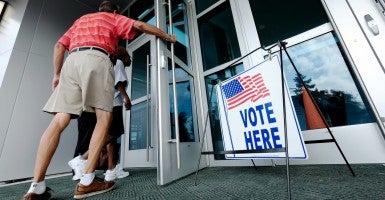 Kaylan L. Phillips is an attorney with the Public Interest Legal Foundation, a nonprofit law firm dedicated to protecting and restoring election integrity. She may be reached at kphillips @publicinterestlegal.org.

Noncitizens are registering to vote and at best, it seems the federal government’s officials don’t care about this illegal activity.

At worst, it raises questions about whether some in Washington support illegal voting, so long as it supports their political agenda.

The exact number of noncitizens who are voting in our elections is difficult to quantify because of the bureaucratic quagmire perpetuated by federal agencies against the (very few) states that have the resolve to attempt to verify citizenship.

Yet evidence of noncitizen voting mounts. The American Civil Rights Union just filed an amicus brief with the Supreme Court documenting instance after instance of noncitizens registering and voting. It urges the Court to take up a petition for certiorari filed by Kansas and Arizona seeking to overturn a bad decision on this issue by the 10th Circuit Court of Appeals.

Last February, the Heritage Foundation’s Hans A. von Spakovsky spoke before a House committee and provided examples of foreigners voting.

Worse, none of the perpetrators were prosecuted by Obama’s Justice Department. The examples provided by von Spakovsky are now before the Supreme Court in the briefs filed.

With the federal government inaction increasing, Kansas and Arizona resolved to implement their own citizenship safeguards—something the Constitution allows them to do.

But one little-known federal agency is blocking their citizenship verification efforts, and they have to ask the Supreme Court for help.

The problem is the U.S. Election Assistance Commission, a small agency charged with printing the federal voter registration form.

The Election Assistance Commission routinely adds state-specific instructions to the form that educate users to any special requirements of their particular state. It did just that for Louisiana in 2012. Yet Kansas and Arizona’s requests—coupled with evidence of noncitizen voting in their own states—were denied as “unnecessary.”

Adding insult to injury, the denial was not by a majority of the Election Assistance Commission commissioners, as required by law. The denial was made by a single Washington, D.C., bureaucrat—the agency’s then-acting executive director.

A federal district court found the bureaucrat’s decision arbitrary and outside of her authority, but unfortunately, the 10th Circuit reinstated it.

Supreme Court to Take Up Case

The Supreme Court will soon consider whether it should take up the case for review. It presents several questions but one that we should all be concerned about is whether additional citizenship verification efforts by the states are “necessary.”

The Election Assistance Commission’s acting executive director said that the current “efforts” are sufficient. What are those efforts that help ensure only citizens are voting?  A “yes/no” checkbox at the top of the registration form and small print about citizenship by the signature line. We all know how many people read the small print, but what about that checkbox?

The American Civil Rights Union’s brief shows that the checkbox is so ineffective that even if an individual checks “no,” some voters were still registered.

The Union’s brief links to 13 examples of real voter registration forms gathered by the Houston-based voter integrity watchdog, True the Vote. Four individuals checked “no,” six checked “no” and “yes,” and the remaining three left the checkbox blank entirely.

And how many were registered? Every single one.

This should not be a partisan issue. Nor should citizenship verification efforts be seen as “anti-immigrant.” These efforts are necessary to enforce the laws we already have on the books. They are necessary to maintain the integrity of our elections and restore faith in the democratic process.