Is the GOP Really Serious About Stopping Obama’s Amnesty Plan? 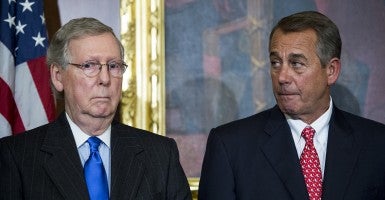 House Republicans successfully passed a bill that funds the Department of Homeland Security, but ensures President Obama’s amnesty, engineered in an executive action in November, won’t be funded.

Senate Republicans have tried three times to bring the bill up for consideration and yes, each time Senate Democrats have filibustered and not allowed the bill to come the floor.

But now Senate Republicans appear to be giving up.

Senate Majority Leader Mitch McConnell said Tuesday, “The next move obviously is up to the House.”

Unfortunately, the only thing “obvious” here is that Senate Republicans don’t appear committed to the fight.

The legislative tactics used by Democrats aren’t exactly surprising.  Did McConnell and team not expect them?  Why haven’t they developed a “Plan B” instead of suggesting the House, which has already passed the bill, should come up with one?

Republicans are, after all, the majority party in the Senate holding 54 seats, which is just six shy of the 60 needed to break the filibuster.

And shouldn’t the pressure be on Democrats, not on House Republicans?

At least seven Senate Democrats have made public statements in the past three months questioning Obama’s executive amnesty actions. Every public opinion poll shows the majority of Americans are opposed to them as well.

Think about this:  By refusing to pass the House DHS funding bill, Democrats are literally taking the position that Social Security cards for illegal immigrants are more important than paychecks for border patrol agents.

Republicans can’t win that fight?  Give me a break.

If the GOP played tougher they might be able to force some Democrats to break ranks.

But instead, McConnell tells us that the Senate is “stuck” and they are wiping their hands of it and tossing the political football back to the House.  That is simply unacceptable.

Conservative voters who put many Republicans in office are rightly expecting more.  Does anyone recall hearing a single Republican candidate running for office last fall saying they would only be willing to fight the good fight against Obama’s executive amnesty actions if they had 60 votes in the Senate?  No one, including those now in Senate leadership, ever expected to have 60 seats and yet they promised time and again they would do battle if given the majority.

The very way Republicans won a majority last fall, by making their case to the American public, is exactly the same strategy they should be taking up now on the DHS bill.  Yet Republicans have allowed this battle to be fought out in the backrooms of Congress – out of sight of all except the most engaged politico.

It’s two weeks before funding runs out for DHS and members of Congress will be at home all of next week for the President’s Day holiday.  With the funding deadline looming and the ability of members to hold town halls and talk to their constituents directly, not through the Washington press corps, what better timing than now to get the public engaged?

McConnell and other GOP leaders should stop holding press events outside their Senate conference rooms and take this battle to the public square.  Obama’s runs around the Constitution are a serious matter and they deserve the most serious of efforts by those we elected to stop him.