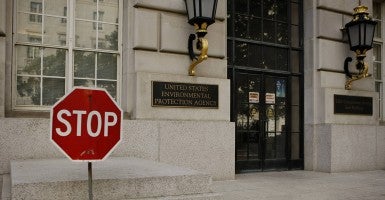 For more than 15 years, the Environmental Protection Agency has resisted releasing data from two key studies to the general public and members of Congress. Government regulators used those studies to craft some of the most expensive environmental rules in U.S. history.

When skeptics within the federal government questioned and challenged the integrity of the studies—the Harvard Six Cities Study and an American Cancer Society study known as ACS II—they were silenced and muzzled.

That’s when the Republican staff on the Senate Environment and Public Works Committee stepped in to shine light on the situation, revealing the scope of the scandal in in a report titled, “EPA’s Playbook Unveiled: A Story of Fraud, Deceit and Secret Science.”

>>> This is the second of a two-part series. Read the first part: How This Phony CIA Agent Pulled Off a ‘Scam’ to Impose Environmental Regulations on Americans

The key player in the scandal is John Beale, who was sentenced to serve 32 months in federal prison on Dec. 18, 2013, after pleading guilty to stealing almost $900,000 from U.S. taxpayers.

It was in 1994 that Beale first began to beguile EPA employees and supervisors into believing he worked for the CIA. When he failed to report for work, Beale would enter “D.O. Oversight” on his calendar, which meant he was a director of operations responsible for covert operations at the CIA.

But it was the role Beale played beginning in the mid-1990s in creating and implementing regulations pursuant to Clean Air Act that continues to reverberate and linger at the expense of the American people.

Two Allies at the EPA

Over the past decade, evidence has emerged to reveal the Six Cities and ACS II studies did not support enacting one of the most controversial, far-reaching and expensive regulations in American history. Otherwise, the agency would have provided access to the data without a fight.

The political appointees who led the EPA at the time feared the consequences of enacting such a regulation without being able to offer scientific evidence of its necessity. Beale needed an ally. He needed someone to explain the problems with the research and the reasons the data could not be released. Someone who could run interference with various actors in Washington. He found one in top EPA official Robert Brenner.

Brenner had recruited Beale, his former Princeton University classmate, to the EPA as a full-time employee in 1989.

Brenner, then deputy director of the EPA’s Office of Policy Analysis and Review within the Office of Air and Radiation, hired his friend despite Beale’s lack of legislative or environmental policy background. He also placed Beale in the highest pay scale for general service employees—a move typically reserved for those with extensive experience.

He then allowed Beale to collect retention bonuses, which go to only the most highly qualified employees to keep them from jumping ship—an unlikely scenario for a man who had picked apples and worked in a small-time law firm in Minnesota before joining the agency. Employees are supposed to be eligible for such bonuses—potentially worth as much as a fourth of the employee’s annual salary—for only three years, but Brenner helped Beale receive them for more than 10.

The two would work together at the EPA for 25 years—during which time the Office of Policy Analysis and Review would grow “in both scope and influence” as Beale and Brenner worked in tandem to muzzle dissenting voices within the White House Office of Information and Regulatory Affairs (OIRA) and the EPA’s Clean Air Scientific Advisory Committee.

At the crux of their agenda—the initiative that would build their legend within the agency—was implementation of a fine particle standard regulating air pollution.

The formula had been set with the American Lung Association sue-and-settle agreement and codified in a confidential document known as the “Beale Memo,” which described how Beale pressured regulatory and clean air bodies to back off criticisms of EPA rulemaking both within the agency and in correspondence with members of Congress.

The EPA attempted to conceal this document from Sen. David Vitter’s committee investigators, but a conscientious whistleblower “turned it over surreptitiously,” the report said.

The memo outlined how Beale and Brenner would work to compress the time the Office of Information and Regulatory Affairs and the voluntary Clean Air Scientific Advisory Committee had to review regulations so they could get away with using “secret science.”

The Clean Air Scientific Advisory Committee opposed from the start the move to regulate fine particulate matter. Members claimed there was no precedent or court order to establish these regulations, that research had not distinguished between dangers posed by PM 10 particles and those a fourth that size under PM 2.5, and that the PM 2.5 target was arbitrary and tied to no known science. (PM stands for particle matter, a term “for particles found in the air, including dust, dirt, soot, smoke, and liquid droplets,” according to EPA.)

Further, the committee, known as CASAC, complained it was being asked to do the work that took eight years on the previous air quality review in 18 months.

“The Beale memo is interesting in that it provides evidence of Beale’s direct role in ensuring concerns raised by other agencies, CASAC members and OIRA were not considered in the final rulemaking,” wrote Luke Bolar, spokesman for Vitter, in an email to The Daily Signal. “While there were major concerns with the science and the cost-benefit analysis as outlined in comments filed on the rule, the Beale memo was written to push back against OIRA publicizing those concerns,” Bolar added. “They didn’t have to directly ‘blunt’ criticism, as Beale got his way through his close ties to Mary Nichols (then head of the Office of Air and Radiation) and Carol Browner (EPA administrator.”

Efforts to slow Beale, Brenner and their highly charged regulations failed. As a result, today the “co-benefits” of PM 2.5 are used to justify almost the entirety of the Obama administration’s air quality initiatives even though the immediate benefits still have yet to be proven.

“There is no watchdog now inside the EPA,” laments Steve Milloy, the former editor of JunkScience.com, which has posted a fact sheet that debunks the EPA’s PM 2.5 claims. “Whatever the EPA wants it gets. The agency is allowed to run rampant. There was a time when OIRA use to have stopping power, but now it’s just ignored. OIRA has become a rubber stamp.”

This is especially true of PM 2.5, Milloy says. “There is no real world evidence” PM 2.5 has caused sudden or long-term death, he said. “The claim that PM 2.5 kills people is at the heart and soul of how the EPA is selling these regulations. But it’s a claim that’s not supported by the facts or evidence. The EPA has rigged the whole process.”

Indeed, the purported co-benefits have become the benefits, according to Vitter’s report.

“Historically, EPA used co-benefits in major rules as one of several benefits quantified to justify a rule in the RIA,” the report says. “Yet, at the beginning of the Obama administration, there was a ‘trend towards almost complete reliance on PM 2.5-related health co-benefits.’ Instead of being an ancillary benefit, EPA started using PM 2.5 co-benefits as essentially the only quantified benefit for many CAA regulations.”

The Senate report claims all but five air pollution rules crafted between 2009 and 2011 listed PM 2.5.

Lack of Transparency at EPA

The Clean Air Act requires EPA to set air quality standards to protect public health with an “adequate margin of safety.” In its review of the National Ambient Air Quality Standards, the EPA considers factors such as the nature and severity of health effects, the size of the at-risk groups affected and the science.

Several exhaustive scientific reviews prior and subsequent to the 1997 standards were conducted following open, public processes that allowed for public review and comment prior to updating the standards. EPA press secretary Liz Purchia told The Daily Signal in an email that the process is open enough.

The National Ambient Air Quality Standards are bolstered by “sound science and legal standards,” she said, and “several exhaustive scientific reviews prior and subsequent to the 1997 standards were conducted following open, public processes that allowed for public review and comment prior to updating the standards.”

Beale’s involvement in no way undermines the rational basis for the agency’s decisions nor the integrity of the administrative process. Reducing the public’s exposure to ground-level ozone and PM protects millions of Americans from costly and dangerous illness, hospitalization, and premature death.

All that may be true, but the EPA still won’t provide the underlying data to put the matter to rest.

Vitter and his team say this is because the EPA can continue to overstate the benefits and understate the costs of federal regulations—just as Beale did in the 1990s.

“This technique has been applied over the years and burdens the American people today, as up to 80 percent of the benefits associated with all federal regulations are attributed to supposed PM 2.5 reductions,” the report states.