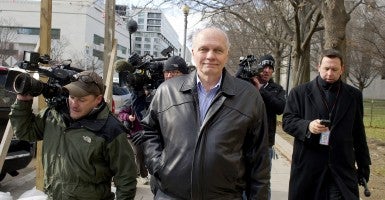 Remember the EPA bureaucrat who got caught receiving $900,000 in pay without working because he claimed he also was employed by the CIA?

According to a report from the Senate Environment and Public Works Committee, the man, former climate policy expert John Beale, “retired” when questions arose about his spotty attendance and expense records.

Only he didn’t file his retirement paperwork and continued to draw an active-duty salary for some time after. His boss at the time in the EPA’s Office of Air and Radiation, now-EPA Administrator Gina McCarthy, knew this for about seven months and did nothing to stop it.

“On March 29, 2012, an OAR official raised concerns about Beale’s retirement when he informed McCarthy that Beale was still on payroll,” the report stated.

“Despite being aware of the fact that one of her subordinates was collecting a paycheck without providing any work product, this arrangement continued for seven more months before McCarthy ever contacted Beale.” In December 2012, McCarthy met with Beale for the first time in nearly 15 months, and he informed her that he was no longer planning on retiring. Two more months passed before concerns with Beale were officially reported to the inspector general. On April 30, 2013, McCarthy had cause to fire Beale, but instead elected to allow him to voluntarily retire with full benefits.

Liz Purchia, press secretary for McCarthy, told The Daily Signal in an email: “[McCarthy] believed he was retired, and [that] was the reason he was not in the office.”

How Did He Do It?

According to the Senate report, Beale’s career at the EPA was marked by relentless dishonesty on matters large and small and a cadre of supervisors who, like McCarthy apparently in the matter of his retirement pay, enabled his self-dealing behaviors.

He claimed an injury so he could ride first-class on flights for government business, which in one case drove the ticket price from $1,000 to $14,000. He forged expense forms, claimed to be away on CIA business for 2½ years worth of work days and flew to Los Angeles and stayed in posh hotels on the EPA’s tab for family visits that had nothing to do with agency work.

Few even attempted to question Beale’s frequent absences, enormous expense reports, exorbitant salary—he retired as the agency’s highest-paid employee—and lack of accountability. He was personally popular, well-connected and believed to be among the agency’s most effective employees.

But Beale’s greatest deception has nothing to do with first-class flights and fancy hotels.

Beale, who is serving a 32-month sentence in the federal prison in Cumberland, Md., for pleading guilty to felony theft of government property, spent most of his career devising regulations under the Clean Air Act that are justified by science few have seen and no one has peer-reviewed, according to the Senate report.

“We should all question how John Beale became a senior official at the EPA and played a major role in long-lasting policy decisions while pulling off a scam I thought only Hollywood could make up,” Sen. David Vitter, R-La., told The Daily Signal.

“But this egregious case helped us successfully reveal how EPA has wasted taxpayer resources and mismanagement in a manner that is far too common.”

Beale’s penchant for bilking the EPA out of money eroded the trust Americans place in their government and EPA employees place in their superiors and coworkers. But it was the role he played beginning in the mid-1990s in creating and implementing regulations pursuant to Clean Air Act that continues to reverberate and linger at the expense of the American people.

Staffers with the Senate Environment and Public Works Committee set out last year to probe the relationship between “sue-and-settle” arrangements and evidence they had uncovered that pointed to the manipulation of scientific data.

What they discovered, as detailed in their report, titled “EPA’s Playbook Unveiled: A Story of Fraud, Deceit and Secret Science,” was how agency officials concealed and misled about the science that underpinned its most significant initiatives and silenced and marginalized their own internal watchdog offices, which enabled the agency to greatly overstate the benefits and underestimate the costs of its Clean Air Act rulemaking.

Under the Clean Air Act, the EPA is required to create National Ambient Air Quality Standards for particulate matter and ozone. The American Lung Association sought to jumpstart this process with a so-called “sue-and-settle” suit filed in 1995.

The idea behind “sue-and-settle” is for friendly plaintiffs to sue a government agency, work out agreeable terms—perhaps even beforehand—and emerge with a court order to implement rules or regulations that could not have been achieved through the democratic or even regulatory process.

The American Lung Association suit resulted in a consent decree that called for the EPA to propose final standards for particulate matter by Nov. 29, 1996, and issue the standards by July 19, 1997. The decree set no deadline for ozone standards because they had been reviewed in 1993 and were not up for another review until 1998. But Beale and Robert Brenner, his best friend and erstwhile boss, made what documents called a “policy call” and seized on the urgency to produce new particulate matter standards to rush through a new ozone standard as well.

This put the agency in the position of advancing two regulatory standards simultaneously, which it had never done. And it put the agency and those charged with reviewing such regulations, including the Clean Air Scientific Advisory Committee, under impossible deadline pressure.

Why Beale Was Emboldened

The EPA admitted in court papers filed pursuant to the American Lung Association lawsuit that any period shorter than Dec. 1, 1998, for promulgation of the particulate matter standard “would require the EPA to reach conclusions on scientific and policy issues with enormous consequences for society before it has had an adequate opportunity to collect and evaluate pertinent scientific data” and that further time was needed to reach a “sound and scientifically supportable decision.”

Beale had no time for that. He needed an ally to move things along and found one in Carol Browner, the Al Gore acolyte and former staffer who served as administrator of the EPA through both terms of the Clinton administration. Beale formed a close relationship with her and met with her multiple times per week to discuss his progress on this.

The urgency, as well as his influence with the boss and an unwillingness of others at EPA to block him, gave Beale “the mechanism he needed to ignore opposition to the standards.”

Beale’s efforts to include ozone in the new regulations proved expensive for Americans.

The EPA estimated the cost at $2.5 billion, but its estimate was based on receiving the full benefits of cutting ozone but achieving only a partial attainment of the standards, which the law did not permit. The Council of Economic Advisers also measured the cost and found it to be $60 billion—24 times the EPA estimate.

Indeed, as was the case with him getting away with not showing up for work and submitting exorbitant expense reports, succeeding in this regulatory sleight of hand only emboldened Beale to go further.

That first round of standards, which regulated coarse particulate matter, such as pollen and dust, became known as PM10. But Beale wanted more.

In 1997, with the backing of his superiors, he sought to engage the agency in regulating fine particulate matter—particles a fourth the size of those regulated under PM10 and too small to be visible to the human eye.

But to enact these regulations, EPA first had to produce scientific research that established these smaller particles posed a threat to humans.

To accomplish this, Beale pulled data from two controversial studies—the Harvard Six Cities Study and an American Cancer Society study known as ACSII. The data was not trusted. The air advisory committee pointed out it had not been peer-reviewed, and others indicated Beale was exaggerating the findings for his desired result.

Further undermining those studies’ credibility is that even now, 20 years later, EPA still refuses to release the data, despite McCarthy’s promise to do so during her confirmation hearings.

Though Beal is out of the picture and in prison, his rulemaking techniques he employed to advance the 1997 National Ambient Air Quality Standards for ozone and particulate matter remain firmly entrenched.

“This effort codified EPA’s now customary practice of using fine particulates (PM2.5) to inflate the benefits of nearly all regulations issued under the Clean Air Act,” the Senate report concludes. “Yet the science supporting nearly all of EPA’s alleged benefits remain hidden and unverified.”