Obama Drops the Pretense of Bipartisanship 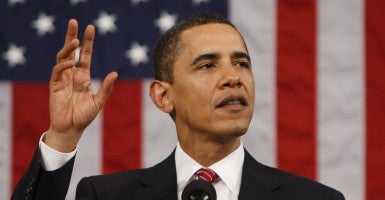 Let’s be grateful to President Barack Obama. In his State of the Union address, he dropped the pretense of bipartisanship and, by siding with the progressives, gave the nation what it needs: a clear choice. That’s the true American way.

One of the most tiresome things about the first six years of President Obama’s tenure was his fake bipartisanship. He often offered to work with the opposition, provided it was reasonable. But since to him only his own ideas are reasonable, the offer was meaningless.

His pretense was popular because it appealed to our love of bipartisanship: Americans like the idea that reasonable people can agree on the solutions to the contentious moral issues at the heart of politics. We’re a nation of problem solvers, and for the most part it’s served us well.

But politics aren’t like that. They’re about dilemmas to be handled and principles to be applied, not problems to be solved. Because of that, permanent victories are rare. Permanent battles are the norm. We say we want bipartisanship, but fortunately we don’t act that way.

A good bit of the democratic world does. In much of Europe, for example, politics have become extremely consensual. There are still political parties, but the differences between them have shrunk to the vanishing point. Germany is governed by a “grand coalition” of Christian Democrats and socialists; Britain by a coalition of Conservatives and Liberal Democrats.

But the best example of consensus politics in Europe comes from Sweden, where in December, six parties agreed to support the center-left government. Sweden’s prime minister said this was an example of the country’ “proud tradition” of working together.

That sounds nice. But actually, the deal was done to keep the Sweden Democrats, a populist party that wants to reduce welfare spending on immigration, from holding the balance of power. That’s politics when it’s dominated by a clubby, liberal establishment that denies choices which fall outside their narrow, approved range.

Of course, Sweden, Germany and Britain have parliamentary systems, and we don’t. But clubby consensus isn’t a product of a particular system: in the 1980s, across parliamentary Western Europe, you could vote communist. We have more lively politics here because our elite isn’t as dominant as the European one, and so hasn’t succeeded in smothering our differences.

And thank goodness for that. The clash of opinions isn’t guaranteed to produce truth, but elite agreement is almost certain to produce error. From campaign finance reform to the Vietnam War, some of our greatest failures have been backed by a political consensus.

In Europe, too, consensus breeds pushback. Across the continent, it’s spawning opposition parties — from the U.K. Independence Party to the anti-austerity Syriza in Greece — precisely because the establishment consensus is so narrow.

Nor has our lack of consensus been bad, on the whole, for America. True, the political warfare between the White House and Congress has hurt our military. But it’s helped to hold down spending and taxation and reduced the number of new laws, which is good for the private sector. Even the administration’s love of rule by administrative pen hasn’t eliminated that advantage.

What the president did last week was to offer a clear choice, without the rhetoric of phony bipartisanship. His party has suffered unprecedented losses. He came out punching with proposals designed not to pass, but to control the agenda and trip up conservatives.

That’s a good thing. For while the American people say they want bipartisanship, standing by your principles isn’t the sign of a broken system. It’s the sign of a genuinely competitive system that works — for all Americans.