Obama’s Allowing More Drilling, But It’s Not All It’s Cracked Up to Be 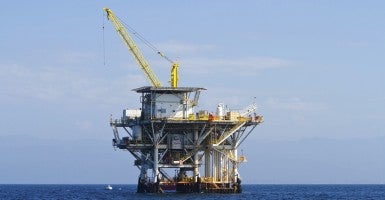 One step forward, two steps back. That sums up the Obama administration’s proposed lease plan for oil and natural gas drilling.

The proposal includes the mid- and south-Atlantic regions, which had been blocked from energy exploration. But any new areas of exploration are just making up for areas lost in 2010, and the president’s plan ultimately moves the U.S. even further away from a free-market energy policy.

In 2008, Congress and President Bush lifted a ban on the leasing of federal waters along the Atlantic and Pacific that had been in place since the 1980s. In March 2010, President Obama announced a plan for lease sales along the mid-Atlantic and southern Atlantic coasts.

“[The] bottom line is this,” he said at the time. “Given our energy needs, in order to sustain economic growth, produce jobs and keep our businesses competitive, we’re going to need to harness traditional sources of fuel even as we ramp up production of new sources of renewable, homegrown energy.”

But it wasn’t long before the administration closed off all access in a misguided and damaging overreaction to the BP oil spill.

The current proposed leasing plan again would open up those same Atlantic waters as well as several areas along the northern Alaskan coast (parts of the Cook Inlet and Beaufort and Chukchi Seas). This certainly is a step in the right direction, but it amounts to a rather small step that may in fact be more of a step backwards, all things considered.

First, the proposed plan is exactly that—proposed. The plan covering the years 2017-2022 will need to go through an environmental impact statement process required by the National Environmental Policy Act, as well as comment periods before it is finalized. During this process, proposed areas can be dropped from the final plan, but no new areas can be added. In other words, there is no guarantee the final plan will look like what the administration has proposed. Second, although there is strong support for oil and gas exploration along the parts of the Atlantic proposed, the president’s plan would offer only one lease sale in the year 2021. Similarly, in Alaska sales would be limited to only one each for the Beaufort Sea (2020), Cook Inlet (2021), and Chukchi Sea (2022). Ultimately, according to the Institute for Energy Information, “Under President Obama’s direction, offshore lease sales have gone from 31 sales in President Bush’s last plan to 14 sales in this latest one. This plan proposes even fewer sales than his existing lease sale plan.”

Further, the proposed plan comes on the heels of the administration’s call on Congress to lock up more than 12 million acres in Alaska and another order yesterday to withdraw another 10 million acres off the Alaskan coast for energy leases.

The fact remains that Obama has not supported growth of energy production on federal lands. Where he and his administration have not frustrated energy exploration and production, they have resorted to a “defeat-by-delay” strategy, racking up costs and uncertainty, which exacerbate the financial risks of oil and gas exploration. Meanwhile, state and private lands have attracted the business of oil and gas companies, outpacing development on federal lands on and off shore.

Along with truly allowing greater access, the administration should create a dependable regulatory process that encourages domestic production. Further, Congress should move forward to allow states to manage energy production on federal lands and waters as they see fit.