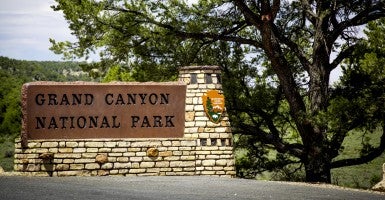 The Grand Canyon is a national landmark that attracts nearly 5 million visitors annually. ANWR is a much different story. Slightly more than one thousand people visit the 19.6 million acres refuge each year. (Photo: Getty Images)

What do Yosemite and Alaska’s Arctic National Wildlife Refuge have in common? Not a whole lot, but that isn’t stopping the Obama Administration from linking the two in a massive land grab attempt to prohibit American energy development.

The Obama administration is calling on Congress to designate more than 12 million acres in Alaska as wilderness, including the coastal plain, barring economic activity and energy development.

If Congress chose to act, it would be the largest wilderness designation since President Lyndon Johnson signed the Wilderness Act into law more than a half century ago. In making the announcement Interior Secretary Sally Jewel remarked, “Just like Yosemite or the Grand Canyon, the Arctic National Wildlife Refuge is one of our nation’s crown jewels and we have an obligation to preserve this spectacular place for generations to come.”

Yosemite is a national landmark that attracts around 4 million visitors annually. Even if Yosemite were abundant in natural resources, its importance as a federal landmark trumps energy development.

The Arctic National Wildlife Reuge is a much different story. Slightly more than one thousand people visit the 19.6 million acres refuge each year.

And ANWR boasts massive energy potential. According to the U.S. Geologic Survey, an estimated 15-42 billion barrels of oil lie in ANWR’s 1002 Area, the Coastal Plain. The entire 1002 area represents 1.5 million acres out of more than 19.6 million. The Survey produced these estimations in 1998, where they said producers could extract 10.4 billion barrels–using 1990s drilling technologies–that lie beneath a few thousand acres with minimal environmental impact.

Seventeen years later, the technologies have vastly improved. By opening ANWR we could truly find out Alaska’s energy potential. Importantly, the U.S. Geologic Survey also notes that “nearly 80 percent of the oil is thought to occur in the western part of the ANWR 1002 area, which is closest to existing infrastructure.”   Oil produced in ANWR could relieve potential technological challenges Trans Alaska Pipeline System faces if the supply becomes too low.

While Alaska is home to many pristine areas, the 1002 Area is not one of them. The Department of Interior highlights that ANWR’s 1002 Area contains has no trees, deep water lakes or mountain peaks. Winters can get down to negative 30 degrees Fahrenheit and the area experiences 56 days without sunlight.   That doesn’t quite sound like the place you had in mind when you want to pack up the family for an RV trip.

At the heart of the issue is control over land management. The sheer size and diversity of the federal estate and the resources both above and below ground are too much for distant federal bureaucracies and an overextended federal budget to manage effectively. On the other hand, state governments and budgets can be more accountable to the people who will directly benefit from wise management decisions or marginalized by poor ones, making it more likely that resources will be both developed and developed safely in a way that protects the environment.

Senator Lisa Murkowski (R-Alaska), chair of the Senate Energy and Natural Resources Committee summed it up best: “What’s coming is a stunning attack on our sovereignty and our ability to develop a strong economy that allows us, our children and our grandchildren to thrive,” she said.