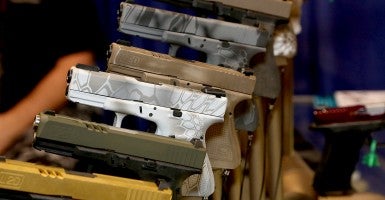 But people who work in the business of manufacturing, importing and exporting firearms are concerned about the treaty and what it means for them and their industry.

I talked to several last week at the Shooting, Hunting, and Outdoor Trade (SHOT) Show in Las Vegas. Although they were grateful for the strong stand against the treaty taken by both the Senate and House, they were confused about what is going on with the treaty and how such agreements work their way through the Senate.

The idea behind the treaty, supposedly, is to prevent weapons from reaching the hands of terrorists or mass killers. But the treaty has been championed by avowedly “progressive”—in other words, left-wing—organizations, which have a long history of hostility to the Second Amendment and Israel, and a track record of seeking to use international institutions to impose their views on the United States. It’s not in our interest to play along with them.

Understandably, the treaty was a nonstarter for the United States until President Obama took office and changed the country’s stand on it. Secretary of State John Kerry signed the treaty, but the administration has not yet submitted it to the Senate for ratification.

This doesn’t erase the U.S. signature from the treaty. But the Senate’s letters (and similar efforts in the House, led by Rep. Mike Kelly, R-Pa.) do send a powerful signal that the Senate would reject the treaty if the administration ever gets around to submitting it.

But even if the Senate votes against the treaty, the U.S. signature would remain on it.

Only the president, by doing what is colloquially known as “unsigning” the treaty, can erase that U.S. signature. President George W. Bush, for example, unsigned the Rome Statute on the International Criminal Court in 2002, which President Bill Clinton had signed in 2000.

And even if the Senate votes against the treaty, that does not “kill” the treaty. Treaties are like zombies: They rarely die.

For example, the Senate rejected the Comprehensive Test Ban Treaty in 1999, but the U.S. signature remains on it, and it continues to sit in the in-box of the Senate Foreign Relations Committee, waiting for a day when an administration that supports the treaty senses the Senate is likely to look favorably upon it.

There is no expiration date on pending treaties, even ones the Senate has rejected. If you get the sense it’s really hard to get rid of a treaty, you’re right.

In short, the only thing that would come close to “killing” the ATT as far as the United States is concerned would be for a president to unsign the treaty.

Of course, that would not kill it around the world, but it at least would make the U.S. legal and political stance clear. And even then, a future president could re-sign the treaty and pull the zombie back out of the grave, though this would be a highly unusual step that likely would cause political controversy.

It goes to show that, to vary the analogy, bad treaties are like bad pennies—they just keep turning up. It also shows how important it is for the United States to stay engaged internationally: We can’t always stop bad treaties from being negotiated, but we can at least try.

All this begs a question: Why hasn’t the administration transmitted the ATT to the Senate? After all, Kerry signed it in September 2013.

It’s possible the administration hasn’t completed its legal review of the treaty—in which case, it effectively signed the treaty without reading it. It’s also possible the administration realizes the Senate won’t approve the ATT anytime soon, so it sees no point in bothering, especially as it has other bad treaties that it wants to get ratified first.

A third possibility is the administration actually prefers to keep the treaty in its back pocket.

Now that the United States has signed it, we are in theory bound not to defeat its object and purpose, meaning the administration can claim to be on the road to ratification and—using the president’s famous administrative pen—can keep U.S. policy aligned with it. Especially given the Senate’s hostility, this is likely one reason the administration hasn’t acted.

But there’s a final possibility.

It is possible the administration is unwilling to offer its own analysis of the treaty for Senate and public scrutiny because an accurate analysis would have to concede, for example, that the treaty cannot hope to do all—or even most—of what its advocates claim, and that it was adopted via a process that violated one of the administration’s own red lines. No analysis that ignored this would be credible.

In short, the administration may be stuck—unable to go forward because of the Senate’s hostility and the treaty’s flaws, unwilling to unsign, and therefore ready to settle for simply keeping the treaty in its back pocket and using its pen as it sees fit.

If that is the case, the leadership of the Senate and House becomes all the more important.

Although the Senate cannot unsign a treaty, it can offer powerful guidance to the nation and to the courts that it has not given its advice and consent to the treaty, does not plan to do so, and rejects the argument the United States is bound to uphold its object and purpose. That, in turn, paves the way for a future president to unsign the treaty.

And in the interim, there is a lot—11 things, at least—for the Senate and House to do to keep the treaty from encroaching on our sovereignty and posing other threats. It’s hard to get rid of a bad treaty. But it’s not impossible, and it’s time we get started.