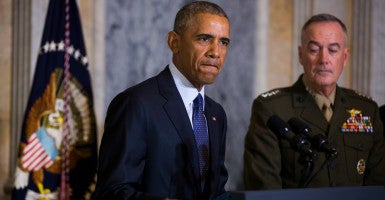 “People with possible ties to terrorism, who are not allowed on a plane should not be allowed to buy a gun,” President Barack Obama says. (Photo: Sipa USA/Newscom)

President Barack Obama and administration officials made a strong push for gun control Tuesday in the wake of the terrorist attack in Orlando. Speaking about the attack after a meeting with his national security team, the president asserted gun control is needed if Congress is serious about being tough on terrorism.

When The Daily Signal asked White House press secretary Josh Earnest if any national security or intelligence report has identified gun control as an effective counterterrorism tool, Earnest cited only comments from an interview with Homeland Security Secretary Jeh Johnson.

“We have to face the fact that meaningful gun control has to be a part of homeland security,” Johnson told CBS News on Tuesday. “We need to do something to minimize the opportunity for terrorists to get a gun in this country.”

While he didn’t identify a national security study or report, Earnest added that it’s Republican lawmakers that have opposed the Centers for Disease Control and Prevention from studying the issue.

“Republicans have routinely prevented the CDC from actually even conducting any studies about the impact of gun violence. The answer to your question is something I think Republicans are scared to learn,” Earnest said.

The spokesman said it’s too early to say at this point what gun control measures would have prevented the Orlando terror attack.

“The investigation into what happened in Orlando is barely 48 hours old. It’s hard to assess now what could have been done differently or what different laws or regulations would have prevented this terrible, tragic, terrorist incident from occurring,” Earnest continued. “The truth is the secretary of Homeland Security made, I think, a pretty strong argument. He certainly has a lot of expertise in this area. There are also a lot of common sense that informs his position. If any individual can walk into a gun store and buy a weapon of war, and walk out that same day, that certainly enhances the ability of a would-be terrorist to kill more innocent Americans. Why wouldn’t we prevent that from happening?”

The argument for gun control is “pure partisanship,” countered James Carafano, vice president for the Kathryn and Shelby Cullom Davis Institute at The Heritage Foundation.

“Gun control has never been part of the counterterrorism debate,” Carafano told The Daily Signal. “Orlando was no more of a mass shooting than 9/11 was. Terrorism is not about the weapon. The intent is to kill people and use whatever weapon is available. You could ban every weapon a terrorist could use and live in a padded room. The president always waits for a crisis with dead bodies to make an argument he cannot honestly make in the cold light of day.”