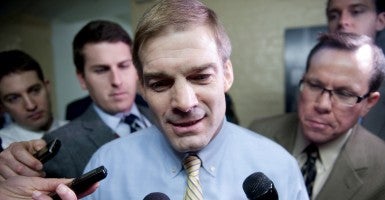 Conservative lawmakers are officially rolling out a new group aimed at advancing a conservative agenda in the House of Representatives after they expressed discontent with the direction of the Republican Study Committee.

“Our main hope is that we can represent the voids and valleys for our constituents back home,” Rep. Raúl Labrador of Idaho told The Daily Signal today. “With a small group that is nimble and able to work on issues that are of importance to our constituents, we can make a difference in Congress.”

Called the House Freedom Caucus, the group serves as a conservative alternative to the Republican Study Committee, which has over 170 members. However, it was not formed to be “anti-RSC,” a Republican congressional aide told The Daily Signal last month.

Membership in the Freedom Caucus will be by invitation only, and the group plans to “advance an agenda of limited, constitutional government in Congress.”

“Our main hope is that we can represent the voids and valleys for our constituents back home,” says @Raul_Labrador.

“The House Freedom Caucus gives a voice to countless Americans who feel that Washington does not represent them” its mission statement says. “We support open, accountable and limited government, the Constitution and the rule of law, and policies that promote the liberty, safety and prosperity of all Americans.”

The new group will boast around 40 members, though there is no set cap according to Labrador, and more than 30 have signed on to the Freedom Caucus for its debut. Members of the group will suggest potential members and vote on their membership, Labrador said. All will pay dues, enabling the new caucus to hire three to four staff members. The nine founders, though, will pay “mortgages,” or a higher level of funding, National Review reported.

Those more than 30 House Republicans will meet tonight to draft the Freedom Caucus’ bylaws.

“We want to accomplish an agenda of conservative reform, something where we represent the values of the people back home,” Labrador said. “Both parties make the mistake of representing special interests and lobbyists and the groups that give money to their campaigns. We really want to represent the people, and that’s what we want to make sure we do in the House Freedom Caucus.”

Whispers that conservative House members would start an alternative to the Republican Study Committee began earlier this month. The group then did not have a name, but several RSC members were looking to form a new group that would draft and push conservative legislation.

The Republican Study Committee began in 1973 as a vehicle to advance conservative policies. However, some of the group’s members feared that it began to drift from its founding roots over the years, especially as its membership swelled to more than 170 lawmakers—more than half of all Republicans in the House.

The November election of Rep. Bill Flores of Texas to serve as RSC chair further fueled discontent among the committee’s more conservative members, as they feared Flores would side with House leadership on policy issues and debates.

In an interview with The Daily Signal, Flores said he views the Freedom Caucus as a “complimentary effort to advance the cause of conservative policy in this caucus.”

“You’ve got a group of passionate conservatives just like the Republican Study Committee, and they will have an opportunity to get together and come up with ideas,” Flores said.

The Texas Republican said he met with Jordan during the group’s earlier planning stages and said he’s confident Freedom Caucus members will remain in the RSC. Flores even suggested lawmakers in the new caucus share ideas with the RSC to “help get these conservative policies across the finish line on the House floor.”

Labrador told The Daily Signal there were general conversations with leadership about the group, but said there was no direct feedback about its formation.

“We don’t want to surprise leadership,” he said. “We want to work with leadership.”

“We don’t want to surprise leadership,” says @Raul_Labrador. “We want to work with leadership.”

The debate over a border security bill from Homeland Security Chairman Michael McCaul of Texas gives the Freedom Caucus its first opportunity to push conservative policy, as National Review first reported. Though the legislation focuses on securing the border—an aspect of immigration reform conservatives are pushing for—conservatives believe the House and Senate should first focus on a bill that blocks President Obama’s immigration executive action.

The House passed legislation addressing the president’s immigration policies earlier this month. However, the Senate has yet to do so.

Labrador said participating in the debate around McCaul’s bill allows the Freedom Caucus to speak as an official group. He lamented that often times, conservative members fail to present a plan and a strategy in pushing a conservative agenda. However, he’s hopeful that the group will present a “positive message” for the House.

>>> What These House Conservatives Think About the 2016 Republican Field

This story was updated with a quote from Rep. Bill Flores.