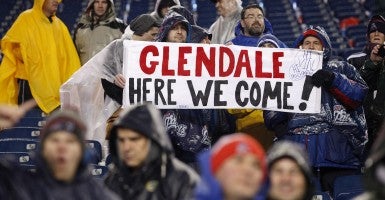 New England Patriots fans hold up a sign congratulating the team after they defeated the Indianapolis Colts 45-7 in AFC Championship Game. The Patriots will take on the Seattle Seahawks at Super Bowl XLIX in Glendale, Ariz. on Feb. 1, 2015. (Photo: Matthew Healey/Newscom)

The mayor of Glendale, Ariz., is not optimistic about his city’s financial prospects after hosting Super Bowl XLIX.

“I totally believe we will lose money on this,” Mayor Jerry Weiers told ESPN.

Weiers said that Glendale was left in debt after hosting Super Bowl XLII at University of Phoenix Stadium in 2008.

According to ESPN, “[t]he NFL thrives on the perception that football is a powerful economic stimulus; anyone who questions that poses an existential threat. Unsurprisingly, Weiers’ bluntness has not endeared him to the league.”

“This Super Bowl was promised before I became mayor,” Weiers, who began his term in 2012, continued. “There wasn’t any backing out.”

“They were telling people after that Super Bowl that they made a lot of money, and that they had about $13 million worth of media exposure to the city of Glendale,” Bidwill told Phoenix’s KTAR.

According to the Associated Press, Glendale spent $2.3 million on security in 2008, and expects to spend $3.2 million this year.

The AP reports that officials see the higher cost as necessary after “previous security threats” – such as the Boston Marathon bombing – have increased risks.

“It’s just a fact. My city does not have the funds to host these major events if we don’t get some sort of help,” Weiers told the AP.

Officials told the AP that though risks are always possible, they “can’t imagine” an incident in Arizona.

A bill that would have reimbursed some of Glendale’s expenses died in the Arizona legislature.