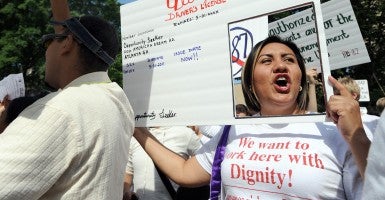 An Arizona policy barring “DREAMers” from getting state drivers’ licenses was struck down by a federal court Thursday. (Photo: Erik Lesser/ZUMAPRESS.com/Newscom)

On Thursday, a federal district court struck down an Arizona policy barring “DREAMers” from getting state drivers’ licenses.

Supporters of President’s Obama immigration policies and his latest plan to provide “deferred action” (i.e., amnesty) for up to five million illegal aliens should not take too much comfort in this ruling, however, because the judge made it clear that a simple change in Arizona law might allow the state to do what it wants to do – and more.

On Jan. 22 in Arizona Dream Act Coalition v. Brewer, Arizona federal district court Judge David G. Campbell (a George W. Bush appointee) issued a permanent injunction against the state’s interpretation of an Arizona statute that prohibits issuing driver’s licenses to “a person who does not submit proof satisfactory to the department [of Transportation] that the applicant’s presence in the United States is authorized under federal law.”

In 2012, Janet Napolitano, the former secretary of the Department of Homeland Security (“DHS”), implemented President Obama’s “Deferred Action for Childhood Arrivals (‘DACA’) Program,” which suspends prosecution/deportation for two years (subject to renewal) of eligible DREAMers, as they were referred to by Judge Campbell. DACA set out various requirements to be a DREAMer, such as having arrived in the United States under the age of 16 and not being older than 30 when applying; residing continuously in the United States for at least five years; attaining certain educational achievements; and not being convicted of certain criminal offenses. Besides deferring action on their illegal presence in the United States, the DACA program provides DREAMers with employment authorization documents, also known as EADs, so they can work here.

Before the DACA program, Arizona’s Motor Vehicle Division accepted all federally-issued EADs as “sufficient evidence that a person’s presence in the United States was authorized under federal law,” and gave them driver’s licenses. After the DACA program was implemented, Arizona revised its policy to provide that the EADs received by DREAMers were not evidence of lawful presence in the United States. At first, Arizona continued to accept all other types of EADs, but then revised its policy to exclude two other categories of illegal aliens who received deferred action and EADs.

Arizona was sued under the Equal Protection Clause of the Fourteenth Amendment by individual DACA recipients, as well as an immigrant youth coalition, who argued that DREAMers were being treated differently from other recipients of deferred action from DHS. Arizona relied on the original DHS memorandum issued by Napolitano that said DACA “confers no substantive right, immigration status or pathway to citizenship” and that only “Congress, acting through its legislative authority, can confer these rights.”

Arizona also argued that the deferred action and EADs being received by other categories of aliens were different than those received by the DREAMers because those aliens either (1) had lawful status in the United States; (2) were on a path to citizenship; or (3) had their EADs issued through a specific statutory provision in our federal immigration laws. DREAMers were not similarly situated, the state argued, because their authorization to stay and work here was being issued simply as a matter of prosecutorial discretion, which is the justification the Obama administration has given for its new immigration policies.

However, Judge Campbell disagreed with Arizona, concluding that the state did not have a rational reason for distinguishing between DACA recipients and other EAD holders. Specifically, Arizona was continuing to grant driver’s licenses to EAD recipients who did not meet one of the three requirements Arizona had articulated as necessary to receive a driver’s license and in fact were “in similar positions” as DACA recipients. Thus, the judge found a violation of equal protection.

However, Judge Campbell made it clear that Arizona had “articulated concerns that may be legitimate state interests” for not issuing driver’s licenses to illegal aliens who have received deferred action. It is just that Arizona had “not shown that the exclusion of DACA recipients is rationally related to those interests.” Most importantly, the judge cautioned that:

The Court is not saying that the Constitution requires the State of Arizona to grant driver’s licenses to all noncitizens. But if the State chooses to confer licenses on some individuals who have been temporarily authorized to stay by the federal government, it may not deny them to similarly situated individuals without a rational basis for the distinction.

If Arizona amends its statute and its policy to take this into account, it might well prevail in a future lawsuit. There is no reason why Arizona, or any other state, is required to issue driver’s licenses to noncitizens who are in this country legally or illegally, temporarily or otherwise. And there are no constitutional reasons why states cannot limit issuing driver’s licenses only to citizens and permanent, resident aliens, who have been authorized to remain in the United States on a long-term basis.

Driver’s licenses are a privilege, not a right, and states generally have wide latitude to determine the requirements for their issuance – as long as they treat individuals who are similarly situated the same. And noncitizens have no constitutional right to obtain a driver’s license.