For First Time Since 2002, al-Qaeda Wasn’t Mentioned in State of the Union 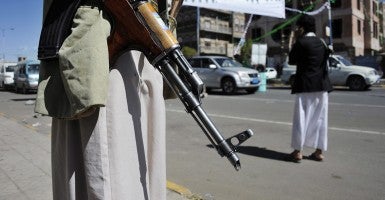 Members of the Houthi militia man a checkpoint amid fears of attacks by al-Qaeda groups. (Photo: Yahya Arhab/Newscom)

Noticeably missing from President Obama’s state of the union speech was any mention of al-Qaeda, the first time that terrorist network went unmentioned since George Bush’s 2002 speech. The president did mention ISIL (the Islamic State of Iraq and the Levant) — an al-Qaeda offshoot — in passing, but ignored the continuing threat posed by its al-Qaeda parent organization.

Instead he spoke as if al-Qaeda had been defeated:

We are fifteen years into this new century. Fifteen years that dawned with terror touching our shores; that unfolded with a new generation fighting two long and costly wars; that saw a vicious recession spread across our nation and the world. It has been, and still is, a hard time for many.

But tonight, we turn the page.

This is a curious approach to take when al-Qaeda has in recent years established a stronger presence in Egypt, Iraq, Libya, Mali, Syria, Turkey and Yemen on the president’s watch and is poised to make a comeback in Afghanistan, if he follows through on current plans to withdraw all U.S. troops.

It is also disquieting to remember that Obama also declared that he had “turned the page” on the Iraq war back in 2010. In 2014, the Iraq war came back with a vengeance, and Obama was forced to order the return of U.S. troops there.

How long before al-Qaeda also returns to strike the U.S. homeland?

(This piece originally appeared in “What Obama Got Right and Wrong in the State of the Union.“)