Feared Rebel Coup in Yemen Would Complicate Fight Against al-Qaeda 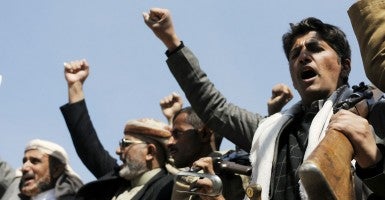 The president of Yemen, Abdu Rabbu Mansour Hadi, was believed to be inside the presidential palace when it was attacked by insurgents. It was not immediately clear if he was safe.

Hadi is an ally of the United States in the fight against al-Qaeda’s branch in Yemen — known as al-Qaeda in the Arabian Peninsula (AQAP).

But Hadi’s government has struggled to contain the militiamen– known as Houthi rebels — raising fears that the group would mount a coup, collapsing the government and descending the country into a civil war.

Yemen’s information minister, Nadia Sakkaf, wrote in an Arabic tweet that the “Yemeni president is being attacked by armed militias that want to overthrow” the government.

The Houthi rebels are thought to be supported by Iran,.

They have been pressing Hadi for more power inside Yemen.

Though the Houthis oppose al-Qaeda, the rise of the rebels complicates the overall fight against terrorism in Yemen. Yemen’s al-Qaeda affiliate has claimed credit for the recent terrorist attacks on the Charlie Hebdo satirical newspaper.

“This creates a whole new level of mess,” Jim Phillips, a Middle East expert at The Heritage Foundation, said about the Houthis’ rise.

“It further weakens the Yemeni government, which has helped the U.S. in the fight against al-Qaeda, and strengthens the Houthis, who are aligned with Iran,” Phillips said.

Hadi, the Yemeni president, came to power in 2012 during the Arab Spring after an uprising that unseated former president Ali Abdullah Saleh.

A top Houthi leader planned to give a speech later today that would possibly clarify today’s events.