Will Brexit Ever Happen? 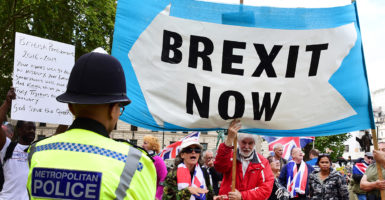 Four years after the famous Brexit vote, Britain remains part of the European Union. The U.K. is scheduled for an exit next month, but powerful members of Parliament are doing all they can to stop it. Today, Conservative Member of Parliament Liam Fox joins the podcast to talk about Brexit, the future of the U.K., and the U.K.’s role in dealing with Iran.

Plus: NBC News is hearing confessions online—but only confessions relating to climate change. We discuss.

Davis: It’s been over four years since Britain held its national referendum that resulted in vote for Brexit. According to the original plan, the U.K. should be out of the European Union by now, but that’s not the case. Briefly, if you can, why is Britain still in the European Union?

Fox: Well, we have an extraordinary and historic tussle going on in our political system. Parliament decided that it couldn’t, or wouldn’t, make a decision on the European question and that it would allow the British public directly to make that decision. And then Parliament said it would implement that decision once the people had made it.

Now we’re in a position where the public voted to leave, but we have a Parliament that would prefer to remain and we’ve got now competing legitimizes. We have a representative democracy. So it is quite correct that legally Parliament can legitimately pass any laws it wants. Against that, you have what I would regard as the moral legitimacy of the public’s decision.

So we now have a position where those who want to remain and effectively ignore and reject the decision of the British people to leave the European Union are trying to find more and more legalistic mechanisms to try to block that.

Those like myself who voted and campaigned to leave take the view that whatever parliamentarians want, it is their democratic duty and they are honor-bound to implement the will of the people as they said they would. Not withstanding that they technically do have the legal legitimacy to pass whatever legislation they see fit.

So I think it’s now a question of honor. It’s whether our politicians are willing to do what they promised and carry out what they told the voters in good faith would happen after the referendum. And I fear that if we have what would be effectively the greatest democratic heist in modern history with the referendum being stolen from the British voters, I really do dread what the political consequences of that would be.

And a lot of those who say that they are against a no-deal Brexit are in fact against Brexit. There is more than a little bit of disingenuousness about the whole debate. There is no agreement that they would ever vote for because they don’t want to go and they will use any means they can parliamentary or legalistic to try to ensure that Britain doesn’t leave the European union.

I would prefer to leave with a deal because I believe there are some elements of a no-deal Brexit, including economic disruption, but potentially also strains on the union inside the U.K. itself, which would make a deal preferable. But let me be 100% clear, I would absolutely prefer a no-deal Brexit to no Brexit.

A no-deal Brexit may have its problems that we would have to deal with, but I think that no Brexit would be politically seismic in a way that very few people in Britain currently understand.

Davis: Are you still holding out hope for some kind of deal or is a no-deal pretty much what most Brexiteers are looking at?

Fox: No, I hope that we do get a deal. I voted for [former Prime Minister] Theresa May’s deal, much as there were elements of it I didn’t like, because when you’re a minority government pushing a referendum result with a parliament that doesn’t want it, your room for maneuver is relatively limited.

I think the current prime minister, Boris Johnson, wants it to be a deal with the European Union where we can disaggregate 46 years of economic, political, and legal framework in an efficient way. But if we have to leave without a deal, so be it because we have to leave.

>>> What You Need to Know About Boris Johnson, and the Path Forward for Brexit

Davis: The current Brexit date is set for Oct. 31. That’s already an extension. Is it possible that gets extended further or is this really the cliff?

Fox: It is legally possible that it could be extended. I think that the British public simply wouldn’t understand another delay. Their view is, it’s more than three years since we gave you an instruction. You didn’t ask us for a consultation about our position in Europe. Parliament asked us for an instruction and said it would honor it. We gave it, why has it not happened?

And I think the public appetite for delay is diminishing all the time. I was out in my own district last Saturday and I found a level of hostility toward the current parliament that I might have found difficult to conceive of in the past.

Davis: You mentioned potential tensions within the U.K. if there were a no-deal Brexit. Are you alluding to Scotland potentially holding another referendum to leave the U.K.? What kind of fragility would you see?

I have a lot of trouble with the concept of nationalists. Patriots I have no trouble with building their views on their pride in their country. Nationalists are who tend to often base what they think on their dislike of others. That’s a problem for me.

Davis: I want to shift to another subject that you’ve spoken on quite a bit and worked on and that’s Iran.

[There’s] a lot of news coming out of Iran lately. Of course, the Saudi oil attack. The United States pulled out of the Iran deal last year, but the U.K. remains part of that deal, along with other European Union countries. But you’ve been opposed to the deal from the start. Why is that?

Fox: I never thought the JCPOA, the Iran deal, would work. There were a number of problems. First of all, it gave Iran a lot of money up front without Iran having to make any changes.

Secondly, I thought it was over optimistic, if not naive, to believe that the Khomeini regime in Iran would change its behavior in terms of destabilization of its neighbors and it’s link to terrorist groups.

One, companies that had U.S. dealings would worry about the involvement of the U.S. legal system and how they might be trapped in that. And secondly, the opacity of the Iranian system means that it’s very difficult for businesses to know whether their end customer is in fact a member of the IRGC [Iran Revolutionary Guard Corps] and, therefore, in breach of sanctions.

So there were real issues about funding and also real risks, which I think were always going to diminish the appetite of Western businesses to trade with Iran unless there had been a substantial trade internally that made the risk of dealing with the IRGC much less so.

I never thought that that would happen and there the deal is dead. The JCPOA is dead. Anyone that pretends otherwise is not being realistic.

I support President Trump’s maximal pressure initiative. I think it’s necessary for Iran to feel the economic pressure that comes from being alienated. I think their actions from Hezbollah to their involvement in the global drugs trade to their encouragement of the Houthis in the Yemeni Civil War to what looks like a potential attack on Saudi oil infrastructure all point to the fact that this is not a regime with whom you can do normal business.

Davis: Where do you see the United Kingdom lining up on this post-Brexit?

Fox: Of course, the entire political bandwidth of the U.K. is taken up with the whole Brexit issue at the moment. My worry is that that is actually stopping us from focusing on some of these big international issues that really do matter to ourselves and our allies.

The Iranian issue, for example, where we have interference with freedom of navigation of the Strait of Hormuz could easily become a global economic problem because you’ve got about 45% of Chinese oil passing through that strait. There are a large proportion of Japanese, the next biggest economy, also transiting there. So I think that we’re going to have to, at a minimum, ensure that there’s an international coalition that guarantees safe passage.

We’ve already had one British ship taken by the Iranians on the most spurious, and as it turns out, utterly untrue excuses. So that is an issue where there is a global interest and I think we need to ensure that there’s a global answer to that particular security problem.

Davis: All right, Mr. Fox, we appreciate your time today. Thanks for coming in.