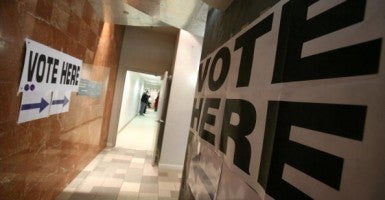 The Equal Voting Rights Institute filed an historic lawsuit on Jan. 15 in Texas on behalf of white Dallas voters alleging that Dallas County commissioners are diluting their voting rights.

Although there have been many lawsuits filed on behalf of black, Hispanic, Asian and Indian voters making such vote dilution claims since the Voting Rights Act was passed 50 years ago, this is the first time such a suit has been filed on behalf of white voters, or “Anglos” (non-Hispanic whites) as they are referred to in the federal challenge.

In Harding v. County of Dallas, the head of the Equal Voting Rights Institute, Dan Morenoff, says that “Dallas carved up a local minority’s vote with a map allowing almost half the population the chance to compete for no more than a fifth of the seats.”   The Dallas County government is governed by a Commissioners Court, a five-member body composed of a county judge elected at-large and four county commissioners representing specific districts. Anglos are a racial minority in Dallas County–31.7 percent of the total population in 2013 according to the Census, and the complaint filed in the lawsuit says they represent 48 percent of the voting-age population.

In 2007, the ability to control who was elected to the county government passed over to black and Hispanic voters. As a result, “since 2004, the candidate preferred by the Anglo racial minority has almost never won countywide general elections contested by the major parties,” according to the lawsuit.

After the 2010 Census, the Commissioners Court redrew the four commission districts. Despite the fact that Anglos constitute almost half of the voting population of the county, the commissioners packed them into only one of the four individual commission districts where they represent 72 percent of the voters. Of the other three districts, one was designed to elect an Hispanic candidate, a second was designed to elect a black candidate, and the third, according to a very strange statement by the county judge, was designed as a “Democratic Opportunity District” for Hispanics and blacks to elect a third commissioner. As the lawsuit says, this is “a bizarre misstatement of the Voting Rights Act’s requirements.”

The remaining Anglo voters who weren’t packed into the “Anglo” district were spread out among the other three districts to assure “the political insignificance of the Anglo voters isolated in each.” This is exactly the kind of discriminatory “packing and cracking” of black voters that courts have struck down on numerous occasions.

In fact, the Voting Rights Act is racially neutral – it protects whatever race is a minority in a particular jurisdiction. And yet the Dallas commissioners made it clear that their only concern was ensuring the political success of blacks and Hispanics, who constitute the majority that controls elections in the county. According to the complaint, Commissioner John Wiley Price said that it was their “obligation under the U.S. Voting rights Act to provide [Hispanic and black] voters with an effective opportunity to elect their preferred candidate of choice.” He made no reference whatsoever to protecting the opportunities of “the dissenting Anglo racial minority.” Instead, the commissioners designed a redistricting map that would “fragment” the votes of the Anglo racial minority in Dallas County.

That attitude also shows one of the major problems with the way the Voting Rights Act is being used today. The VRA was intended to protect the voting rights of racial minorities, not ensure the success of the candidates of one particular political party preferred by non-Caucasian voters, which usually ends up favoring the Democrat Party. Yet these commissioners blatantly admitted they were using its requirements for exactly that purpose – to create a “Democratic Opportunity District.”

The lawsuit challenges the redistricting under Section 2 of the VRA, the Equal Protection Clause of the 14th Amendment and the 15th Amendment. The Bush administration made history in 2007 when it successfully filed the first lawsuit under Section 2 of the VRA against local black officials in Noxubee County, Miss., for discriminating against white voters by trying to keep them from voting, but this Texas lawsuit is the first time that a vote dilution lawsuit has been filed on behalf of white voters.

But as America increasingly becomes a multiethnic society, with whites becoming a minority in many jurisdictions (and eventually nationwide), it is important to establish that discrimination in the voting context is wrong – no matter who is being discriminated against.

If the facts as alleged in this complaint are true, then the black and Hispanic commissioners of Dallas County clearly violated the Voting Rights Act and acted intentionally to discriminate against white voters to dilute their political power. As the Equal Voting Rights Institute says in its press release, the “Voting Rights Act prevents that kind of disenfranchisement of an out-of-favor race, regardless of what race it is.”

Of course, the U.S. Justice Department also has the authority to enforce Section 2 of the VRA and often intervenes in suits filed by voters and civil rights organizations to add its weight to remedying violations of the law. This seems like a meritorious challenge to Dallas County’s discriminatory behavior, which brings up an obvious question: Will the Justice Department intervene in this voting discrimination lawsuit? Will it be interested in seeing this misbehavior remedied?

EVRI is a relatively new organization that says it is was “founded to redeem the VRA, to restore every American’s voting rights, and to assure that those rights remain equally protected for us all.” Dan Morenoff adds that “when Congress took the historic step in 1965 to equally protect all Americans from racial discrimination, they meant every American.” He looks forward “to seeing the Courts enforce that original understanding.” So do I and so should every American voter.