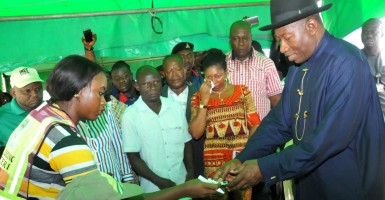 Over the weekend, Boko Haram carried out attacks in several towns in the northeast of Nigeria attempting to derail the presidential and National Assembly elections.

In the village of Buratai, the insurgent group set houses on fire and shot people as they fled the flames, killing at least 25 individuals. Two more attacks took place in the towns of Biri and Dukku that killed 14 people collectively. There was also an attempted bombing at a polling station in Enugu state in southern Nigeria. Fortunately, the police successfully thwarted the attack and there is an ongoing investigation to determine the validity of the suspected Boko Haram connection.

Despite the threat of violence, voter turnout was high, and although Boko Haram attempted to disrupt the electoral process, the situation could have been far worse considering the large groups of people gathered in public spaces to vote.

The Independent Nigerian Election Commission responded positively to these challenges and allowed voting in several areas to be extended into Sunday. The voters were largely patient and cooperative, and the International Republican Institute election observation delegation, part of the coalition of international election observers present in Nigeria, commended the Nigerians, some of whom waited in line hours outside of polling stations.

According to the Independent Nigerian Election Commission Twitter feed, four of the states that have been counted that voted for incumbent, President Goodluck Jonathan, and his party last election now show support for opposition candidate Gen. Muhammadu Buhari and his party. These include the southwestern states of Oyo, Ondo, Kogi and Ogun.

Though this does not ultimately determine the outcome of the presidential elections, the All Progressives Congress (Buhari’s party) appears to have gained the support in non-traditional areas of support. The changes in the Nigerian electoral map have an effect on the makeup of the National Assembly of Nigeria.

Logistics, not violence, so far has turned out to be the largest obstacle in Nigeria’s presidential and National Assembly elections. Looking towards the official presidential and national assembly election results and even further towards the April 11 state elections, the Nigerian people should continue in the peaceful democratic spirit that was demonstrated throughout the weekend elections. The Independent Nigerian Election Commission needs to improve its logistical process and better train its election officials to use the new technology paired with the permanent voter cards that were distributed preceding the elections. Finally, maintaining a secure and peaceful environment for the electoral process to be completed in Nigeria must remain a top priority.