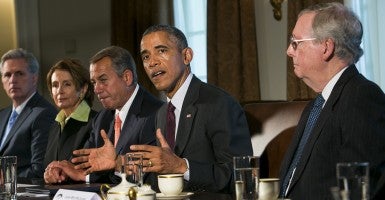 Last week, the House released its bill to fund the Department of Homeland Security through the end of September as well as several amendments that seek to defund President Obama’s  executive actions on immigration. There are several important questions that Congress and the American people should understand before Congress votes on this issue.

What is this funding bill?

The underlying bill here is the homeland security appropriations bill, the only appropriations bill not included in December’s so called “Cromnibus.” The bill, which funds each part of DHS, differs only slightly from prior years’ appropriation bills, which means there are good and bad policies within the bill. For example, the bill rightly provides slight increases for Immigration and Customs Enforcement and Coast Guard operations but fails to reform FEMA disaster funding or the DHS grant system.

Current funding for DHS extends through Feb. 27, but this early house effort looks to deal with the issue of Obama’s immigration actions before the deadline nears. Once passed, it would fund DHS through the end of fiscal year 2015 or Sept. 30.

What are the amendments and what do they do?

The House also released five amendments to the appropriations bill last week that seek to confront the president on his immigration policies. Two of these amendments are central to the effort.

The second core amendment is the Blackburn amendment which similarly prevents any funding from being used to implement the “Deferred Action for Childhood Arrival” or DACA policy memo from 2012. DACA allowed illegal immigrants who were brought to the U.S. as children to apply for work authorization and protection to deportations and could apply to almost 2 million unlawful immigrants, though just over 700,000 had applied as of June 2014.

The other three amendments include the DeSantis amendment that seeks to force the administration to remove immigrants who are convicted of domestic violence, sexual assault and child exploitation.  “Republican Rep. Matt Salmon’s amendment points out that it is cheaper under Obamacare to hire an illegal immigrant than it is a legal immigrant or citizen.”  Finally, the Schock amendment insists that legal immigrants’ applications should not be delayed as a result of the president’s executive actions.

What happens if the bill passes the house?

If this bill passes the House, it will then move to the Senate. Given Senate Majority Leader Mitch McConnell’s promises to push back against Obama’s immigration actions and to govern responsibly, the Senate should consider the DHS funding bill well before the Feb. 27 deadline, so that any policy differences can be debated without going down to the wire.

Should the bill pass the Senate, Obama will be faced with a choice: Sign a bill passed by the people’s representatives using their rightful legislative and budgetary authority, or reject funding for DHS in order to defend his unilateral and unconstitutional executive amnesty.

DHS Secretary Jeh Johnson is already invoking the specter of a government shutdown, but Congress need not fear such an outcome if it moves quickly to stop Obama. Some have expressed worry that U.S. security is endangered with this approach, but it is Obama who is endangering the U.S. by forcing DHS to focus on implementing executive amnesty rather than other more important duties and reforms.