No Excuses for ‘CRomnibus’ Spending Bill 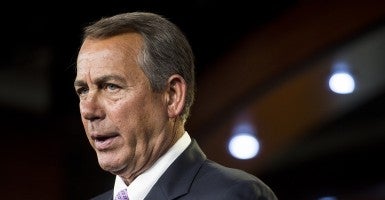 For those keeping track, Congress had ample time to debate its 12 spending bills and give lawmakers a real opportunity to address out-of-control federal spending. But it was not to be.

The “CRomnibus” spending bill represents a strange marriage between an omnibus packed with 11 spending bills funding everything from the failed Head Start program to the Community Development Block Grant program (remember the infamous pet shampoo company grant?) and a continuing resolution for Congress to punt on what to do about President Obama’s contentious executive order on immigration until February of next year.

This year, there are absolutely no excuses for dropping a 1,600-plus-page bill on lawmakers and their constituents at the 11th hour. In previous years with no joint budget agreement, Congress was faced with two sets of spending figures (a lower amount allocated by the House, and a higher amount pushed by the Senate) which made writing a mutually agreeable spending bill a daring task. But this time, Congress had its spending allocations for nearly exactly one year based on the Ryan-Murray budget deal to weaken the Budget Control Act.

Lawmakers have no excuse for neglecting the budget process–political convenience is certainly not a legitimate one.

Not unlike last year, lawmakers are once again confronted with continuing funding for corporate welfare, poorly functioning government programs and other matters that would not fit the definition of “national priorities” even if one tried hard to squeeze them into such a mold. The clock is ticking on the dreaded partial government shutdown as the current resolution expires at midnight on Thursday, exerting pressure on lawmakers to just go along.

Going along is partially responsible for federal spending having increased by 63 percent since 1994. Duplication of federal programs and services alone costs taxpayers an estimated $45 billion. Meanwhile, the federal debt reached $18 trillion the day after Thanksgiving.

The federal budget process can work to prioritize taxpayer dollars in accordance with the national interest only if Congress follows it. If it refuses, it should at least recognize its shortcomings and allow a BRAC-like spending commission to give it a try.