Doctors Killed His Mom Because She Was Depressed. Now He Speaks Out Against Euthanasia. 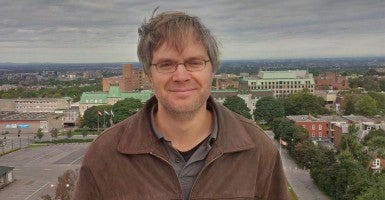 'I was completely shocked and traumatized,' Tom Mortier says of his mother's death by euthanasia. (Photo courtesy Tom Mortier)

Just weeks ago, the world watched as Brittany Maynard, a 29-year-old woman with terminal brain cancer, followed through on her vow to take her own life.

Today is the day I have chosen to pass away with dignity in the face of my terminal illness, this terrible brain cancer that has taken so much from me … but would have taken so much more.

Maynard’s willingness to go public with her story made her the face of the controversial “right-to-die” or “death with dignity” movement.

>>> These Women Begged Brittany Maynard Not to Choose an Early Death. And They Will Die With Dignity, Too.

Where You Have a ‘Right to Die’

“Death-with-dignity” laws allow patients with six months or less to live to opt for what some call physician-assisted death — and others refer to as physician-assisted suicide. To obtain the lethal injection, patients must be capable of making and communicating health care decisions and have the approval of two or more physicians.

The practice differs from euthanasia, which is when patients ask that their lives be ended.

Euthanasia is not legal anywhere in the U.S. Internationally, though, it is allowed in Belgium and the Netherlands.

Although euthanasia laws originally were designed with terminally ill patients in mind, they have evolved to include persons with mental illness or physical disabilities, those who didn’t or couldn’t consent, and even children.

In Belgium, where it is now legal for terminally ill children who are in great pain and have parental consent to end their lives, euthanasia is the cause of about one in 50 deaths.

The issue of euthanasia created a divide among Belgians.

Some, such as Tom Mortier, a 38-year-old chemistry professor at Leuven University College in Flanders, say his country has gone too far.

On April 19, 2012, Mortier’s mother was put to death at age 65 for what doctors called “untreatable depression.” He is appealing to the European Court of Human Rights over the conditions of her death.

Mortier is fighting the European Court of Human Rights over the conditions of his mother’s death. (Photo courtesy Tom Mortier)

Mortier didn’t find out his mother, Godelieva De Troyer, had been euthanized until he received a phone call the next day asking him to retrieve her body from the morgue.

“I was completely shocked and traumatized,” Mortier says in an email interview with The Daily Signal.

Mortier says his mother had struggled with depression for many years and attributes her worsening conditions to the breakup of a romantic relationship and to being disconnected from her family.

After her last relationship ended, she broke off contact with me and my children because she was worried that I was the same as my father who committed suicide when I was 5 years old.

In seeking euthanasia, his mother asked doctors not to make contact with her children.

Oncologist Wim Distelmans, a doctor who specializes in tumors and also advocates for the life-terminating procedure, ended De Troyer’s life with a lethal injection.

Mortier says neither Distelmans nor a psychiatrist he consulted to approve the life-ending procedure (also a close friend of Distelmans) had a previous involvement with his mother’s health.

In fact, De Troyer’s treating psychiatrist of more than 20 years refused to help her die, maintaining that she did not satisfy the requirements of Belgian law.

At first Distelmans agreed, and he too declined to help De Troyer end her life.

But after she made a donation of 2,500 euro (more than $3,000) to Life End Information Forum, an organization he co-founded, Distelmans carried out De Troyer’s request.

Mortier says his mother is not the only “victim” who gave money to Distelmans’ organization.

Distelmans also heads a government-established commission responsible for investigating any failure to observe the euthanasia law in Belgium.

Mortier calls this a “clear conflict of interest.”

‘I don’t agree that an oncologist with no expertise in treating complex mental health issues can kill a physically healthy woman.’

Believing he had exhausted all legal options in Belgium, Mortier and his lawyer Robert Clarke, who is based in Vienna, Austria, appealed to the European Court of Human Rights, challenging Belgium’s laws that allow doctor-prescribed death.

The complaint, filed by Alliance Defending Freedom, a nonprofit Christian organization based in the U.S., argues that Belgium’s law has gone too far. It contends “the balance has shifted unacceptably in favor of personal autonomy at the expense of the important public interest and a state’s obligation under Article 2 [the right to life].”

Of his decision to pursue legal action in Europe’s high court, Mortier says:

I don’t agree that an oncologist with no expertise in treating complex mental health issues can kill a physically healthy woman, without contacting her children, on the basis of the advice of one psychiatrist who is a close colleague.

>>> Commentary: My Mom Has the Same Brain Cancer Diagnosis Brittany Maynard Had. She’s Fighting to Live As Long As She Can.

Clarke warns of a “slippery slope” associated with the right-to-die movement. In an interview with The Daily Signal, Clarke says:

When even the co-chair [Distelmans] of the body responsible for ensuring compliance with those rules is not following them himself, we start to see the true scale of the problems that come with offering death as an alternative to proper care and treatment.

He says the story of Mortier’s mother offers a cautionary tale for states in America that are considering similar right-to-die measures:

The facts of this case, and the requirements of the law in Belgium, are so far apart that it demonstrates that if you legalize euthanasia, you cannot control it. This is a slippery slope and it led to Belgium making euthanasia available to children, with no lower age limit, earlier this year.

But George Eighmey, vice chairman of Death With Dignity National Center in Portland, Ore., a U.S.-based organization that advocates “death-with-dignity” laws, says there is no comparison with the situation in Belgium.

“In the United States, we do not permit euthanasia,” Eighmey says, adding:

We do not allow people who are vulnerable to use the law unless they are mentally competent in having their requisite prognosis and diagnosis. So there’s no comparison to Belgium or the Netherlands where euthanasia is permitted.

Not a single one of the fears expressed by those opposed to Oregon’s Death with Dignity Act about abuse or coercion under the law has ever materialized.

Anne Singer, communications manager at Compassion and Choices, the pro-assisted suicide organization behind the Brittany Maynard video, tells The Daily Signal that the “slippery slope” narrative promoted by opponents of the right to die is a hoax:

Not a single one of the fears expressed by those opposed to Oregon’s Death with Dignity Act [the first in the nation to authorize aid in dying] about abuse or coercion under the law has ever materialized during its 17 years.

In New Jersey, a bill legalizing assisted suicide has reached the state senate and could very well arrive on Gov. Chris Christie’s desk next year. Back in December 2013, the Republican governor said he opposed the measure.

Heading into 2015, the number of right-to-die cases is likely to increase, as are the number of advocates such as Brittany Maynard and opponents such as Tom Mortier, who says euthanasia laws are “destroying” Belgian society.

Why is it when someone is climbing over the edge of a bridge people stop in their cars to try and talk them down, and the authorities set up an inflatable below to try to save them, but when someone in Belgium announces to their doctor that they want to die, the government looks at ways to make it possible?