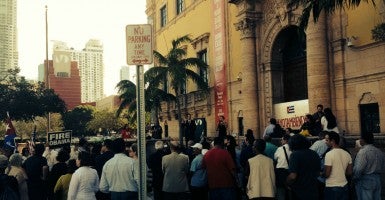 The rally in Miami, like its counterpart in Cuba, was intended to provide a forum for people to talk about the future of the island. (Courtesy photo)

Cuban authorities arrested several dissidents and activists in an apparent attempt to prevent them from attending a planned rally in Havana’s Revolution Square organized by a movement that calls itself #YoTambienExijo or #IAlsoDemand.

At the Freedom Tower in downtown Miami, several Cuban exile groups carried out a simultaneous rally that went on without problems.

The parallel events were meant to provide a forum for Cubans and Cuban-Americans to express their feelings about the future of the island in the aftermath of the agreement between President Raúl Castro and President Obama to normalize relations.

Cuban artist Tania Bruguera came up with the idea of an “open mic” at Revolution Square where attendees could each talk for one minute. The event still occurred today but with a strong police presence.

Among those detained in Cuba was journalist Reinaldo Escobar, editor of the online 14ymedio publication and husband of Cuban blogger Yoani Sanchez.

Sanchez, the founder of 14ymedio, reported the arrests on her Twitter feed.

Sanchez, who was named one of Time magazine’s “100 Most Influential People” in 2008, also reported that she is under house arrest.

According to NBC News, Antonio Rodiles, director of the civic project Estado de Sats, and Aliuska Gomez of the opposition group Ladies in White also were arrested.

In a phone conversation with The Daily Signal, Armando Ibarra, a 30-year-old Cuban-American born in Miami who participated in the Florida rally, spoke of the arrests in Havana.

“In essence, [Cuban authorities] showed their fear,” Ibarra said. “They showed that even the smallest expression of individuality and the desires of Cubans are met by fear from the government.”

Ibarra, who helped organize the Miami event, said there was no direct coordination with the group in Cuba. But the simultaneous events and the different outcomes revealed a powerful message.

“We did it to symbolically to show the differences [between Cuba and the U.S.],” Ibarra said. “It ended up reflecting that here we were able to gather and express ourselves openly—even those who disagreed with most of us. But the Cuban government arrested activists and dissidents who participated or had connections with participants.”

Freedom of expression remains core of US policy on #Cuba; we support activists exercising those rights and condemn today’s detentions.

Ibarra vows to continue his activism. He says he wants to prove wrong the view that most young Cubans support the new Obama-Castro initiative.

“We want to put pressure on U.S. government to show you are wrong to say the Cuban [young] community doesn’t care anymore [about keeping the embargo],” Ibarra said. “But our target is not Obama. The target is the Castro regime. We want to show the world that this continues. This is just the beginning. We will continue these efforts until Cubans get the human rights they deserve.”