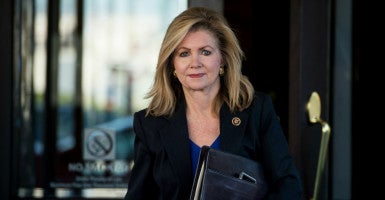 "If forced to do so, we will issue subpoenas to any organization that refuses to fully cooperate with our investigation,” Rep. Marsha Blackburn, R-Tenn., chairwoman of a select panel, said. (Photo: Bill Clark/CQ Roll Call/Newscom)

A select investigative panel of the U.S. House of Representatives has issued subpoenas to a research company, a university, and an abortion provider, saying the organizations failed to cooperate fully with a probe of Planned Parenthood’s practices and procedures related to the distribution of aborted body parts.

“We have been working diligently to acquire information that is needed to get the facts about the medical practices of abortion service providers and the business practices of the procurement organizations who sell baby body parts,” Rep. Marsha Blackburn, R-Tenn., chairwoman of the Select Investigative Panel on Infant Lives, said Tuesday in a prepared statement.

Blackburn said California-based StemExpress; the University of New Mexico; and Southwestern Women’s Options in Albuquerque, N.M., had not cooperated with the panel’s requests.

All three were subpoenaed to appear before the House Energy and Commerce Committee to produce specific materials, she said:

While it was our hope that these organizations would voluntarily work with us in this effort, some have refused to cooperate by withholding information that is critical to providing us with answers to questions the American people are asking. Consequently, if forced to do so, we will issue subpoenas to any organization that refuses to fully cooperate with our investigation.

The three organizations subpoenaed were the only ones that did not comply with requests out of more than 30 groups asked to produce documents, The Hill reported.

The pro-life Center for Medical Progress has released a series of hidden-camera videos that put the nation’s largest abortion provider, Planned Parenthood, in the spotlight for its practices and procedures.

In October,  the Energy and Commerce Committee created Blackburn’s Infant Lives panel to investigate practices and policies regarding the purchase of aborted body parts and fetal tissue, its cost, and how these parts are obtained.

“This is about getting answers to questions about how we treat and protect life in this country,” Blackburn, the no. 2 Republican on Energy and Commerce, said in October:

This is a discussion that this country must have; we cannot shy away from what is an unsettling topic. The allegations raised in these disturbing and abhorrent videos have led us to ask: What have we come to in this country? This select panel will allow us to have this conversation and help us get the facts about how infant lives are being treated.

The ranking member on the panel, Rep. Jan Schakowsky, D-Ill., said the subpoenas are “unjustifiable and abusive” and “are a new low in the Republicans’ attack on women’s health care.”

“The chair’s actions are dangerous, particularly given the uptick in violence since release of the false and inflammatory videos against Planned Parenthood last July,” Schakowsky said Tuesday in a formal statement.

StemExpress released this statement in response to the Blackburn panel’s subpoena:

StemExpress has turned over to the Select Investigative Panel numerous materials as well as materials produced previously for the House Committee on Government Reform, Senate Judiciary Committee and House Energy and Commerce Committee for each of their own separate investigations.Throughout this process, StemExpress has continued to protect its clients’ confidentiality, and to abide by its legal obligations. The Select Investigative Panel now seeks confidential client information and the identity of individual scientists and researchers through the issuance of a subpoena.

The subpoena for the University of New Mexico, in part, requests documents that show entities or persons from which it the school purchased or received aborted body parts or fetal tissue, as well as entities or persons receiving the parts or tissue from the university.

Similarly, the subpoena for Southwestern Women’s Options requests, in part, documents to show personnel affiliated with the University of New Mexico.

This report has been expanded to include more details on the subpoenas.