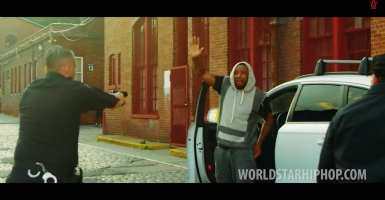 Withdrawing or cutting off taxpayer funding from a New York legal-aid group would be difficult despite its role in a rap video about killing police officers, a civil liberties lawyer says.

Bronx Defenders, the legal group depicted in the video “Hands Up” by rappers Uncle Murda and Maino, has been awarded at least $1.5 million in grants from the U.S. Department of Justice, The Daily Signal reported exclusively Dec. 22.

The video, which depicts the two “gangsta” rappers aiming handguns at a white actor dressed as a police officer, accompanies lyrics suggesting revenge for the much-publicized deaths of black men in confrontations with police.

Taxpayers may have no recourse, Art Spitzer, longtime head of the Washington regional office of the American Civil Liberties Union, told The Daily Signal.  Spitzer said:

Assuming the video was protected First Amendment expression, and assuming the contribution was funded by [taxpayer] money that was not restricted in some relevant way … I think it would be problematic to cut them off because people didn’t like the video.

An example of a relevant restriction on the five Justice Department grants since 2009 that have gone to Bronx Defenders, Spitzer said, would be a requirement that the funds were to be used “only for litigation expenses.”

Robyn Steinberg, executive director of Bronx Defenders, has not responded to repeated requests for comment from The Daily Signal, including whether the legal-aid group helped finance the rap video and how her organization uses federal money in general.

Investigators are looking into whether the man who last weekend shot and killed two New York Police Department officers, Wenjian Liu, 32, and Rafael Ramos, 40, found inspiration in Uncle Murda, one of the two rappers whose online video about killing cops features the legal-aid group. Police say Ismaaiyl Brinsley, 28, shot both Liu and Ramos in the head at close range Dec. 20 as they sat in their squad car in Brooklyn during a break for a meal.

YO @unclemurda: WHEN IS THE NEXT MIXTAPE DROPPING?

Brinsley, described by friends in a Daily Beast profile as a failed recording and sound engineer, fatally shot himself in the head soon after murdering the two NYPD officers, investigators said.

One line from the “Hands Up” video: “For Mike Brown and Sean Bell,  a cop got to get killed.” The subtitle is “Eric Garner Tribute,” a reference to the man who died while being pinned and restrained on a sidewalk by New York police officers.

An NYPD spokesman had no comment, other than to say the investigation of the shooter’s background, including his social media footprints, is ongoing.

Uncle Murda, 34, is a New York-based gangsta rapper whose real name is Leonard Green. Signed to a major-label deal by rap superstar Jay-Z, he gained attention with his 2006 CD release “Respect the Shooter” and its violent, often obscene raps that include foul language about police.

In 2008, Green himself survived a gunshot to the head as he sat in a parked car in New York, an incident that resulted in more coverage of him by the rap media. The rapper refused to cooperate with the investigation and blamed police for his being shot, according to the Wikipedia entry about him.

Green/Uncle Murda defended the “Hands Up” video in an interview with reporter Sibile Marcellus posted at My9NJ.com on Dec. 17, three days before Brinsley killed the two New York officers.

“The police just pull their gun out on us for no reason at all. That’s their way of addressing us,” Green said, adding:

I know 109 [officers] have been killed this year and I don’t say I’m happy about that or anything. I feel bad for their families as well, but all I’m trying to say is when police commit a crime and they do something that’s not right, just like anybody, they should get prosecuted as well.

An email to Green yesterday from a reporter for The Daily Signal, asking whether he knew Brinsley, has yet to be answered.

The production company for “Hands Up,” World Star Hip Hop, did not respond to an email yesterday.

Other images in the disturbing video show white actors dressed as police officers in a car with New York Police Department markings gunning down a black motorist.

Some found the lyrics to be eerily similar to Brinsley’s social media postings before he killed the two officers in Brooklyn.  “I’m putting wings on pigs today,” the shooter wrote. “They take 1 of ours, let’s take 2 of theirs.”

The Daily Signal first reported that the Justice Department has made five grants to Bronx Defenders totaling $1.5 million through a program named for Edward Byrne, a New York Police Department officer shot dead at close range in 1988.

Bronx Defenders, depicted in the video’s script as caring for a grieving mother whose son apparently has been killed by police, also received more than $100 million from city taxpayers since 2007, the New York Post reported earlier this month.

Hans von Spakovsky, a senior legal fellow at The Heritage Foundation and co-author of a book about Attorney General Eric Holder, told The Daily Signal:

Taxpayers should be outraged but not surprised that the Holder Justice Department is funding an organization involved in a video inciting the murder of police officers — and what is most outrageous about it is that the Justice Department is using taxpayers funds through a program named for a New York police officer murdered in 1988.  Not only should this organization be cut off from all federal funding, but everyone at Justice involved in approving this grant should lose their jobs.

In what may be considered a similar case, New York Mayor Rudy Giuliani in 1999 cut city funding for the Brooklyn Museum over its exhibition of a picture showing the Virgin Mary smeared with dung, and other offensive material.

At the time, the Brooklyn Museum also received hundreds of thousands of dollars from the federal government.

The “Hands Up” video may be viewed in its entity here. Warning: Many viewers may find some language offensive and some images disturbing.

Ken McIntyre, news director of The Daily Signal, contributed to this report.