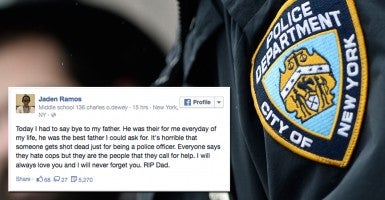 The son of fallen NYPD Officer Rafael Ramos, who was shot to death along with his partner in their cruiser Saturday afternoon, has penned a heartbreaking goodbye to his father on Facebook.

In it, 13-year-old Jaden Ramos writes: “Everyone says they hate cops but they are the people that they call for help. I will always love you and I will never forget you. RIP Dad.”

Ramos, 40, was one of the two police officers shot and killed as they sat in their squad car in Brooklyn while working overtime. He leaves behind two children.

The other slain officer, Wenjian Liu, 32, was a newlywed of two months. According to the NYPD, their killer, identified as Ismaaiyl Brinsley, 28, walked up to the police car, took a shooting stance on the passenger side and fired a handgun several times, striking both officers in the head. Brinsley then took his own life on a subway platform by shooting himself in the head.

Earlier in the day, police said, Brinsley had posted violent threats against police on Instagram in what he said might be his “final post.” Next to a picture of a silver automatic handgun with a wooden handle, Brinsley wrote:

“I’m Putting Wings On Pigs Today. They Take 1 Of Ours….. Let’s Take 2 of Theirs,” with the hashtags #ShootThePolice, #RIPErivGardner and #RIPMikeBrown. Police believe Brinsley shot his ex-girlfriend in Baltimore earlier Saturday. Some observers perceived his actions as “revenge” for the deaths of Eric Garner and Michael Brown in confrontations with police officers. He misspelled Garner’s first and last names in the post.