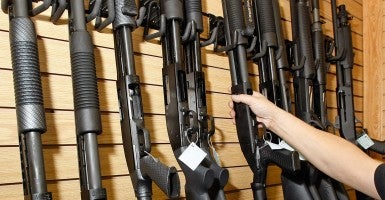 Today, on Christmas Eve, the UN’s Arms Trade Treaty takes effect, giving Americans a lump of coal in their stockings this holiday season.

The ATT is a bad idea that keeps getting worse. In theory, it’s about stopping the sale of guns to terrorists and mass murderers. But in practice, it’s about preventing Israel from defending itself, allowing left-wing activists to dictate U.S. foreign policy and giving anti-gun advocates a leg up.

The treaty takes effect 90 days after it’s ratified by 50 nations. That happened on Sept. 25, so the ATT enters into force on Christmas Eve. That’s not likely to be a coincidence: Treaty advocates pretend the ATT is a present of peace to the world, so the timing suits their propaganda perfectly

The administration made a serious mistake when it signed the ATT in 2013, and since then, it’s been heavily criticized in the Senate, led by Sen. Jerry Moran, R-Kan., and Sen. James Inhofe, R-Okla., and in the House, where Rep. Mike Kelly, R-Pa., has taken the lead. The administration has argued the treaty is nothing more than a restatement of the existing U.S. system of export controls and that it’s irrelevant to firearms ownership in the U.S.

If only. The U.S. firearms market is international, and the treaty certainly can affect U.S. imports. Moreover, the campaign for it was led by organizations and individuals with a long record of hostility to private firearms ownership. And the UN has weighed in by trying to link the agreement to other initiatives that are explicitly designed to restrict firearms ownership.

The claim that the ATT has no implications for U.S. arms exports also is wrong. If we followed the terms of the treaty, we wouldn’t be able to waive our human rights screening requirements to arm rebels in Syria. And in fact, the treaty advocates are already criticizing the administration and Congress for doing exactly that by arguing that the U.S. is violating the ATT.

The long run game of the treaty advocates is simple: Claim the ATT is international law and that it therefore binds the U.S., even if the Senate never ratifies the treaty. They want to sneak the treaty into the U.S. through the back door, because the Senate has nailed the front door shut.

But the activists are wrong: The ATT will have no legal effect on the U.S. after Dec. 24. And if Congress continues to show leadership, the U.S. can resist the creation of treaty precedents and procedures that would restrict our sovereignty.

At bottom, the ATT is a promise of hope and change, a pile of tightly wrapped Christmas presents under the tree. But as we’ve learned over the past six years, those promises aren’t all they’re cracked up to be. And until you actually unwrap your presents, you don’t know what you’re getting for Christmas.