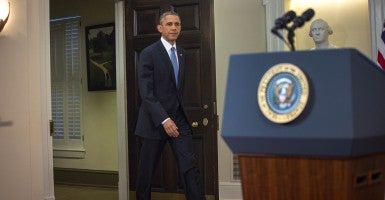 Yesterday afternoon, President Obama announced a series of drastic policy changes toward Cuba. What many may now view as concessions to the Castro regime following a prisoner swap was in fact the White House ending the U.S.’s long tradition of supporting human rights and democratic reforms on the island.

The new policy approach follows the release of Alan Gross, a U.S. aid contractor who was kept hostage for more than five years by the Cuban government. In exchange, the Obama administration freed three convicted Cuban spies who were sent to the U.S. more than 20 years ago to infiltrate U.S. military facilities. Their spying led to the deaths of Americans after their aircraft was shot down by Cuban military jets.

There are three questions the Obama administration needs to answer about its recent policy changes toward Cuba.

Does this mean the trade embargo is over?

No, according to the Cuban Liberty and Democratic Solidarity (LIBERTAD) Act, also known as the Helms–Burton Act of 1996, congressional authorization is required to lift the trade embargo. Seeing as all the Cuban-American congressmen on both sides of the aisle support the embargo, it is unlikely the policy will be overturned anytime soon.

For the first time since 1961, diplomatic relations will now be established. For decades, the U.S. and Cuba have not had embassies in each other’s countries but rather “Interests Sections.” Caps on remittances have been lifted from $500 to $2,000 quarterly. Commercial sales of certain exports from the U.S. will now be allowed. Limited commercial transactions with “private entrepreneurs” on the island are now allowed. Also, the U.S. will assist in increasing “Cubans’ access to communications and their ability to communicate freely.”

These reforms highlight the administration’s ignorance of the Castro regime. Providing the regime with additional sources of income seriously undermines the probability of democratic reforms. The Cuban government charges 20 percent of all remittances sent to the island, and these new reforms have now increased their potential revenue fourfold. Commercial transactions with these private entrepreneurs mainly will benefit the regime’s military and political leadership. The vast majority of state businesses are in the hands of the military, including tourism.

How will this affect the United States?

Following the Obama administration’s feckless policy with Russia and concessions to Iran and now Cuba, the president’s foreign policy calls into question his understanding of world affairs. The Cuban embargo is not based solely on what happened in 1961 but what continues to happen today. It was only last year that the regime was caught trafficking weapons onto a North Korean vessel, in clear violation of a UN Security Council resolution. Despite the Cuban government’s history of sponsoring terrorism directly and now via its proxy Venezuela, the president has instructed the State Department to review Cuba’s designation as a state sponsor of terror.

Expanding commercial exchanges also will expand the danger to U.S. businesses foolish enough to believe they are protected. Just three years ago, Cy Tokmakjian, a Canadian businessman, was arrested and sentenced to 15 years in prison and more than $100 million of his company’s assets were confiscated. Despite the fact that Canada and Cuba have enjoyed warm relations, the Canadian government has been unable to help. Unfortunately, Tokmakjian is not the only one. Seeing as the Castros’ still-uncompensated seizure of U.S. property is considered to be the “largest uncompensated taking of American property by a foreign government in history,” what protections can the president guarantee Americans?

Normalizing relations with a country whose prime export has been an aggressive anti-American foreign policy does not advance U.S. interests. Rapprochement with the Cuban government has always ended badly for the U.S. In 1996, when President Bill Clinton tried extending an olive branch, the Castros responded by shooting down U.S. aircraft and killing four Americans in international waters. Like Sen. Marco Rubio, R-Fla., said, “I would love for there to be normal relations with Cuba. But for that to happen, Cuba has to be normal, and it’s not. It is a brutal dictatorship.”