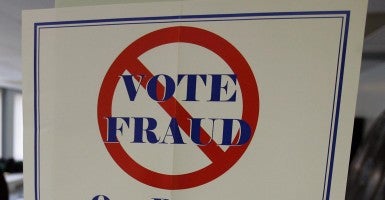 Opponents of reforms intended to improve the security and integrity of the election process are constantly peddling the narrative that election fraud is a nonexistent problem. But they should turn their attention to Benton Harbor, Mich., where the Rev. Edward Pinkney, a local liberal activist, has just been convicted of election fraud—again.

Pinkney was convicted on five counts of forgery for illegally changing the dates on voter signatures on petitions that were being circulated to recall the town’s mayor, James Hightower. Pinkney was apparently upset over Hightower’s vote against putting an income tax on the November 2013 ballot. As a result of Pinkney’s forgery as well as questions about multiple signatures on the petitions by the same voters, the recall election was ordered removed from the ballot by the Michigan Court of Appeals.

Inside the courtroom, Pinkney, now on his 12th felony conviction, was labeled a habitual offender and sentenced to a minimum of 2 1/2 years behind bars. Outside the courtroom, a crowd gathered—not to denounce Pinkney and his fraudulent election tactics, but to condemn the supposed “kangaroo court” that just put the community organizer behind bars. One activist called for a “fight in the streets” to support a felon who tried to defraud the public of a fair election in a tactic similar to Al Sharpton’s embrace of convicted vote-stealer Melowese Richardson as a “hero” at a vote rally in Ohio last March.

For a democratic system to function, citizens must have faith in both the process and the result. That is why society guarantees that each person is entitled to one vote, which must be cast in secret, free of coercion, bribery or other pressures. These fundamental principles protect the sanctity of the ballot box; without them, trust in the system—and thus, the system itself—breaks down.

But for Pinkney, these principles are merely obstacles to be overcome.

In 2005, Pinkney (who apparently has a penchant for organizing recall elections) tried to get a Benton Harbor city commissioner thrown out of office. To further that goal, he orchestrated a scheme to bribe voters at a local soup kitchen to cast absentee ballots. What was the going rate for a vote? A mere $5. Pinkney also illegally took possession of absentee ballots that had been cast by others. In the end, he was convicted of four counts of election fraud.

Seven years after that conviction, Pinkney was back to his old antics. After Hightower failed to back the tax proposal, Pinkney and his organization, the Black Autonomous Network Community Organization, or BANCO, decided the mayor needed to be removed from power. The law gave Pinkney 60 days to gather the requisite signatures to get the recall on the ballot. Unable to make the deadline, Pinkney illegally changed the dates on five pages of signatures. He nearly succeeded in getting a recall election on the ballot, until the courts stepped in to invalidate the falsified documents.

In a legal defense one step above “the dog ate my homework,” the activist’s lawyer claimed Pinkney was only compensating for an “unforeseeable” snowstorm that prevented him from turning in the signatures on time.

The same judge presided over both of Pinkney’s election fraud trials. Unhappy that their paths crossed again, the judge dismissed calls for leniency. “Now you have 12 felonies total, nine of which relate to interfering with the election process, and that’s troubling,” said Judge Sterling R. Schrock shortly before issuing a potential 10-year prison sentence.

Pinkney’s conviction does much to dispel the notion that elections are somehow free of criminal conduct. Here at The Heritage Foundation, we have compiled a record of recent criminal convictions for election violations in virtually every state in the union. Heritage also has produced an information booklet on the importance of election integrity.

Not every case is a Tammany Hall–scale conspiracy, but that does not mean the cases are insignificant. Consider Schrock’s statement at the Pinkney sentencing: “I take issue with the thought that your crimes are basically harmless. Any action that calls into doubt a free and fair election process does extraordinary harm.”