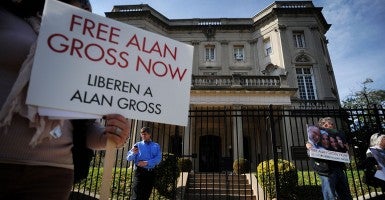 The Cuban government today freed American contractor Alan Gross after five years of captivity, in a negotiated agreement that signals an overhaul in U.S. policy toward the island.

Gross, 65, boarded a U.S. government plane with his wife, Judy, and three members of Congress and arrived at Joint Base Andrews in Maryland just before noon.

President Obama unveiled the most dramatic change in U.S. policy toward Cuba since the 1961 embargo.

Gross’ release was accompanied by a separate spy swap. CNN reported, “The three Cubans released as a part of the deal belonged the so-called Cuban Five, a quintet of Cuban intelligence officers convicted in 2001 for espionage.”

The New York Times reported that the Cubans also released a U.S. intelligence agent who had been in a Cuban prison for nearly 20 years.

In a nationally televised statement from the White House this afternoon, Obama unveiled a broad range of diplomatic and regulatory measures in the most dramatic change in U.S. policy toward Cuba since the 1961 embargo was imposed.

The deal to forge a new relationship was reportedly agreed to over 18 months of negotiations and finalized with a phone call between Obama and President Raúl Castro of Cuba.

Various media reported Pope Francis was a key figure in encouraging the talks.

“We will end an outdated approach that for decades has failed to advance our interests and instead we will begin to normalize relations between our two countries,” Obama said. “These 50 years have shown that isolation has not worked. It’s time for a new approach.”

The U.S. will restore “full diplomatic relations” with Cuba and open an embassy in Havana for the first time in more than 50 years.

The United States will expand travel to Cuba across across 12 categories, including family visits, official visits, journalistic, professional, educational and religious activities, and public performances. Ordinary tourism will remain prohibited.

In addition, licensed U.S. travelers to Cuba will be authorized to import $400 worth of goods from Cuba, including up to $100 in tobacco and alcohol products.

A decades-old American embargo on Cuba will remain in place. Only Congress has the power to lift it.

Senator Marco Rubio, R-Fl., who is a son of Cuban immigrants, criticized the policy changes.

“This whole new policy is based on an illusion, on a lie, the lie and the illusion that more commerce and access to money and goods will translate to political freedom for the Cuban people,” Rubio said in a press conference on Capital Hill. “All this is going to do is give the Castro regime, which controls every aspect of Cuban life, the opportunity to manipulate these changes to stay in power.”

Rubio promised the Republican-controlled congress next year will use the power of the purse to block funding of the proposed embassy.

>>> Commentary: Obama Does Not Have the Authority to Lift Embargo on Cuba

Gross, a Maryland resident, was arrested in 2009 after traveling to Cuba for a subcontractor of the U.S. Agency for International Development to deliver satellite phones and other communications equipment to the island’s small Jewish population.

Cuban officials charged he was trying to instigate a “Cuban Spring.” In 2011, he was convicted and sentenced to 15 years in prison.