Supreme Court Establishes that Police, But Not the Rest of Us, Can Get the Law Wrong—And Not Face Charges 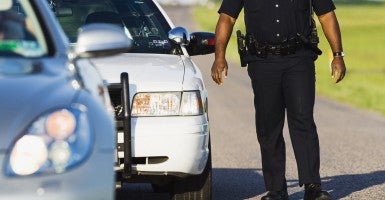 If a police officer’s erroneous understanding of the law leads to him pulling someone over, does he violate the Fourth Amendment, which established “the right of the people to be secure in their persons, houses, papers, and effects, against unreasonable searches and seizures”?

On Monday, the Supreme Court said no, it’s not a violation. In Heien v. North Carolina, eight justices held that a police officer does not violate the Fourth Amendment if he has a mistaken but reasonable interpretation of state criminal law. (Justice Sonia Sotomayor dissented.)

What Constitutes a Reasonable Seizure

The Fourth Amendment forbids, among other things, “unreasonable” seizures. A traffic stop is a “seizure,” and a seizure is unreasonable unless the police have a “reasonable suspicion” that a person has committed a crime (or is about to).

For nearly 50 years, the Supreme Court has made it clear that the “reasonable suspicion” requirement does not demand that an officer be absolutely right; in fact, the officer need not even be more likely right than wrong. A police officer can make a mistake of fact about whether someone has committed a crime and yet still be “reasonable.”

In the Heien case, the Court, by an 8-1 vote, added to that law. The Court ruled that a stop can be “reasonable” even if the officer makes a reasonable mistake of law.

In Heien an officer mistakenly, but reasonably, believed that a driver had violated a state traffic law by having only one working brake light. The officer stopped the vehicle, questioned the driver and another occupant, and ultimately found cocaine, which was used to convict the driver and passenger.

Because the officer’s interpretation of the traffic law was reasonable, the Court concluded, there was no Fourth Amendment violation, even though the officer was wrong about the law (in North Carolina, it is not a violation so long as at least one brake light is working).

The Heien opinion holds that the police can act “reasonably” even if they don’t know the criminal law but then says that no private party can act “reasonably” if he or she makes the same mistake. That dichotomy implies that the police can break the law, but members of the public cannot, a double standard that is offensive to longstanding American values.

That problem arises from two facts: Private parties use the term “reasonable” in a common-sense manner as a guide for their conduct, but the Fourth Amendment uses that word as a term of art and as a legal standard. The result is that the police can act unlawfully but “reasonably” because the scope and requirements of the Fourth Amendment are not identical to those features of the substantive criminal law. The Court could have saved itself some criticism by making that point, but that is the lesser problem with the opinion.

Citizens and Ignorance of the Law

An obvious question raised by the Heien case is whether a private party can also raise a mistake-of-law claim when he is charged with a crime. The Supreme Court appeared to say “no.”

Unfortunately, the Court too glibly treated this important issue.

The Heien opinion will be read as an endorsement of the common law rule that ignorance of the law is no excuse to a crime. The opinion, however, does not examine what that rule means and how it arose.

The common law did not recognize a mistake of law defense because (1) the defense made no sense in past eras when there were only nine felonies, (2) each felony outlawed obviously immoral and harmful conduct, such as murder, rape and robbery, and (3) each crime required the government to prove that the defendant acted with a “guilty mind” or “evil intent.”

The no-ignorance rule made sense 600 years ago but makes no sense today because (1) there are thousands of crimes, (2) in many cases no reasonable person would have thought that the conduct at issue was a crime, and (3) the prosecution does not have to prove that a person acted with a “guilty mind” or “evil intent” in every case.

As Heritage has stated on several occasions (see here, here, and here), a strong argument can be made that the Supreme Court should abandon the common law no-ignorance rule because in many cases it has become a senseless anachronism that creates manifest injustices utterly unimaginable when English jurist William Blackstone described the criminal law.

The Supreme Court did not discuss the arguments on the merits of that issue because it did not arise in Heien. The Court discussed the issue merely to respond to an argument advanced by some non-parties who filed amicus curiae (“friend of the court”) briefs.  Unfortunately, however, many lower courts will cite the Heien opinion as having endorsed the common law rule.

But all may not be lost. It is important to remember, especially at this time of year, that there still could be a happy ending. After all, even Ebenezer Scrooge changed his mind when he finally confronted his past. There is hope that the Supreme Court will do so, too, when a defendant presents a mistake-of-law defense in a proper case.