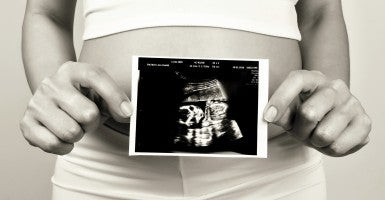 The abortion rate keeps dropping. The latest numbers from the CDC, released last week, show that the abortion rate is the lowest it’s been since 1973, the year the Supreme Court manufactured a constitutional right to abortion in Roe v. Wade.

This raises two important questions: What is the cause of the decline in abortion? And how can we build on this success to protect the right to life for the hundreds of thousands of unborn lives that still fall victim to abortion each year?

Writing at The Atlantic, David Frum suggests that the acceptance of unwed childbearing is the key to the drop in abortion: “Ironically, the socially conservative pro-life movement has made its peace with unwed parenthood as an alternative to abortion.” He renders the movement’s history to arrive at this conclusion in the following way:

This is the fascinating irony of the pro-life movement. The cause originated as a profoundly socially conservative movement. Yet as it grew, it became less sectarian. Women came to the fore as leaders. It found a new language of concern and compassion, rather than condemnation and control. Most radically and decisively, the movement made its peace with unwed parenthood as the inescapable real-world alternative to abortion.

There’s nothing ironic here. From the beginning, the pro-life movement has been about assisting women in crisis pregnancies. The movement that launched crisis-pregnancy centers, the Sisters of Life, and so many other organizations to help house, feed, clothe, and care for expecting mothers has always viewed unwed motherhood as vastly superior to abortion.

It’s far better to allow a child to live, even in less than ideal circumstances, than to kill her simply because she’s inconvenient or might experience hardship.

Of course, marriage matters as well and can have a profound effect on a child’s social, emotional, and financial well-being. Decades of social-science research confirm that the best place on average for a child to grow up is with his married biological mom and dad. Being raised by your mom and dad in an intact, married family generally comes with greater academic success, lower rates of substance abuse, and a significantly decreased risk of childhood poverty. Children raised by their married parents are about 80 percent less likely to be impoverished than those in single-parent households.

This is why consistent policymakers and culture reformers have argued for the importance of marital childbearing as a normative institution. But it is not ironic to think that life is better than death, even life in an imperfect environment.

Why the Rise in Single Parenting?

But have we really ”made our peace,” as Frum writes, with single parenting? In fact, while America has launched a rather successful campaign against teen pregnancy, we haven’t done enough to tell young adults about the consequences of unmarried pregnancy — for both women and their children.

As social scientists Kathryn Edin and Maria Kafalas detail in their book Promises I Can Keep: Why Poor Mothers Put Motherhood Before Marriage, the prevailing view among low-income women is that marriage and childbearing are not necessarily connected. The low-income mothers Edin and Kafalas interviewed for their book overwhelmingly “believe that marriage, not children, is what requires the years of careful planning and preparation and [that] childbearing is something that happens along the way.” Children are not simply desired in low-income communities; they’re described as a “necessity” that need not wait until after a wedding ring.

“Young people in low-income communities are never told that having a child outside of marriage will have negative consequences. They are never told that marriage has beneficial effects,” explains our colleague and welfare expert Robert Rector. “The schools, the welfare system, the health-care system, public authorities, and the media all remain scrupulously silent on the subject. In the face of this pervasive social silence, it should be no surprise that out-of-wedlock childbearing has become the norm in so many communities.”

Frum’s causal links between an increase in unwed births and a decrease in abortions are simplistic. It’s not merely a relative lack of stigma around single parenting or a surge in pro-life sentiment among low-income women that has led to an increase in unwed childbearing. A sexual revolution that decoupled sex from marriage, the sustained desire by low-income women to have children (outside even a committed relationship), the crisis of employed law-abiding blue-collar young men, and an ever-growing welfare state that rewards single parenthood and penalizes marriage have all contributed to the rise in unwed childbearing.

While the rise of single parenting may explain some of the drop in abortion, we shouldn’t be too quick to dismiss the success of the pro-life movement at winning hearts and minds about the dignity of the unborn. Frum credits pro-lifers with finding “a new language of concern and compassion.” That’s true. Indeed, the most recent public-opinion polls show that it has had an effect: A majority of Americans identify as pro-life.

That verbal witness over the past 40 years has been followed by action. Today, more than 2,000 pregnancy centers nationwide provide counseling and medical services to women facing unplanned pregnancies, empowering mothers with life-affirming options. These centers provide medical testing, prenatal care, and childbirth classes, among other medical services. Organizations such as Save the Storks, a team of mobile medical clinics, offer an abortion-minded woman the chance to see an ultrasound of her child — one of the most poignant arguments for the life of the unborn.

It’s not surprising, then, that more young women are choosing to parent when they understand that there’s a life at stake and are provided resources, education, and emotional support to bring the child to term.

Just as we shouldn’t ignore the role of pro-life messages and actions, so too we should not be too quick to downplay the role of policy. Frum argues that neither contraception nor legislation played a significant role in decreasing abortion. But this is too dismissive of the research done in both areas.

Meanwhile, pro-life lawmakers across the country have passed record numbers of laws protecting both women and their children from abortion. As University of Michigan professor Michael New details in a 2014 paper, “the empirical results add to the substantial body of peer-reviewed research which finds that public funding restrictions, parental involvement laws, and properly designed informed consent laws all reduce the incidence of abortion.” New identifies nine other potential causes of the drop in abortions over the past 20 years and cautions against interpreting his work as arguing for which is most important.

Nevertheless, he notes that public-funding restrictions, parental involvement, and informed-consent laws have all had at least some impact on reducing abortion rates in several states. Those trends could continue, especially as states pass additional and different kinds of commonsense laws that protect women and restore the dignity of both mother and child in policy.

The cultural argument for the humanity of the unborn, the surge in practical, physical support of expectant mothers, and prudent pro-life public policies all seem to have played a role in reducing the number of abortions. We should continue to press forward on all these fronts.

The pro-life success in convincing more Americans of the value and dignity of the unborn doesn’t imply a lack of concern with unwed childbearing. Those who believe that women and children deserve better than abortion also seek more for women and children than the very real difficulties of life without a stable family. That we haven’t done as good a job of explaining the benefits and necessity of marriage to young Americans doesn’t mean we’ve given up on the institution.

Today, there is a nascent but growing movement to promote the value of marriage in culture and law. Local, neighborhood-based community groups such as Chattanooga’s First Things First are doing the hard, daily work of teaching teens and young couples the social and economic benefits of lifelong, committed love — not just for themselves, but for their children.

At the policy level, our colleagues at Heritage have outlined ways to reduce marriage penalties in welfare programs so that a low-income man and woman aren’t financially punished for committing to one another and their children. Likewise, national leaders and policymakers can promote the benefits of marriage to teens and young adults through public-service campaigns, much like efforts to reduce smoking and to encourage students not to drop out from high school.

Originally appeared in the National Review.