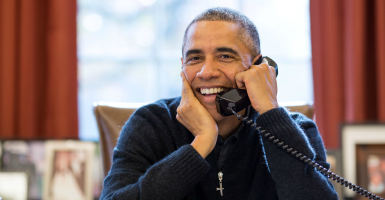 The lame-duck session presents the first test for Republican leadership in the House and Senate since the American people overwhelmingly spoke on Election Day.  As usual, President Obama and congressional Democrats are playing their Washington games.

They are trying to scare and intimidate Republicans in Congress into funding their liberal priorities all the way through 2015 with the threat of a government shutdown and a compliant media ready to blame it on Republicans and conservatives.  With the wind at their back, Republican leaders should not allow this shallow threat to succeed and must stand up to these bullying tactics designed to block the will of Congress and the American people.

This time, the Democrats are trying to protect not only President Obama’s liberal spending priorities, but also his unilateral and unconstitutional decision to grant amnesty to 5 million illegal immigrants.

Just weeks after the American people sent a clear message to Washington against amnesty, Republican leaders in Congress have an obligation to fight back against this lawlessness and bad policy.

The path forward is clear: Pass only a short-term bill that funds the government but does not allow funding for the implementation and enforcement of this executive amnesty.

This strategy puts Republicans on the side of good policy and the rule of law, as well as with the overwhelming majority of the American people who reject President Obama on this issue.

By standing with President Obama, congressional Democrats would be supporting an increasingly out of touch and unpopular president who was just rejected unequivocally at the polls.

Not only is this a fight worth having, it is a fight we can win.  A number of new conservatives will be joining Congress next month who just won election on the promise of stopping amnesty.  By supporting a short-term deal in the lame-duck session that does not fund executive amnesty, Republicans will ensure that the government is not shut down and that President Obama’s lawlessness will be one of the first issues visited in the new Congress.

Republican leaders cannot and should not lock in the priorities of President Obama and congressional Democrats in the lame duck for all of next year.  Doing so would effectively block our opportunities to stop Obamacare, pass policies that grow the economy by cutting spending and taxes, restore a defense budget that protects our nation and respects our troops and veterans, return us to the rule of law and affirm our commitment to life, religious liberty and the values that make our nation great.  We cannot allow these important issues to be waylaid by another lame-duck Washington deal.

The choice is clear.  Pass a short-term funding bill, don’t fund executive amnesty, go home and return in January with Republican majorities in the House and Senate that can begin to set and pass an agenda that reflects the priorities of the American people.