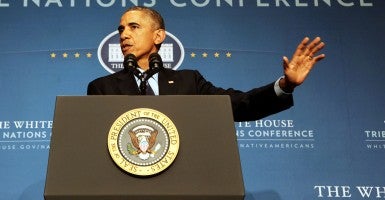 Seventeen states have sued the federal government in federal court in Texas over President Obama’s plan to “unilaterally suspend the immigration laws as applied to 4 million of the 11 million” illegal aliens in the United States.

In addition to the U.S., the lawsuit names as defendants Jeh Johnson, secretary of the Department of Homeland Security; Gil Kerlikowske, commissioner of  Customs and Border Protection; Ronald Vitiello, deputy chief of the Border Patrol; Thomas Winkowski, acting director of Immigration and Customs Enforcement; and Leon Rodriguez, director of Citizenship and Immigration Services.

The lawsuit says it is not about immigration, but “the rule of law.”  It lays out a history of the president’s unilateral rewriting of federal immigration law using his own words against him, such as his declaration that “What you’re not paying attention to is, I just took an action to change the law.”

It has a damning list of other admissions by the president, in which he said that he was “not king;” that he couldn’t “do these things just by” himself; and that federal immigration law is so “very clear in terms of how we have to enforce our immigration systems that for me to simply through executive order ignore those congressional mandates would not conform with my appropriate role as president.”

The key to the suit is the directive that DHS Secretary Johnson issued on Nov. 20 to implement the president’s plan.  The states assert that the DHS directive violates:

Fundamental to any federal lawsuit is the ability to establish standing to bring the suit, which requires showing a specific, concrete injury.  The states are claiming that Obama’s actions will force them to spend “substantial resources on law enforcement, healthcare, and education,” including many expenditures that are “required or coerced by federal law.”  As examples, they cite the Supreme Court’s decision in Plyler v. Doe (1982) that states are “constitutionally obligated to provide free education to children of undocumented immigrants,” and a 1986 federal law that requires states to provide illegal aliens with emergency medical services through Medicare and Medicaid.

The lawsuit cites the enormous law enforcement costs that illegal immigration has already imposed on Texas.  This includes Gov. Rick Perry’s deployment of 1,000 National Guard troops to the border at a cost of $38 million and the $1.3 million a week the Texas Department of Public Safety has been spending to deal with the immigration surge caused by the president’s policies.   The amnesty program will also force states such as Texas to issue professional licenses since “federal work authorization functions as a precondition” for many of these licensees.

As a remedy, the lawsuit seeks an order from the federal court declaring that the president’s deferred action program violates the Constitution and the APA and granting an injunction against its implementation.

So, the first blow against the administration’s immigration plan has been struck not by Congress, but by the states.  Hopefully, that will not deter Congress from also acting collaterally to stop the president’s unconstitutional, unwise, reckless action by ensuring that there is no funding to carry it out.