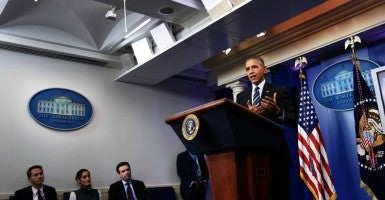 President Obama is submitting his final budget to Congress this week. Regardless of the contents of this budget, the president’s fiscal legacy is largely already written, and it’s a story of failed leadership, broken promises, and a more burdensome government for the American people.

A Legacy of Higher Debt. Since President Barack Obama took office, the national debt has nearly doubled, growing from $10.6 trillion to exceed $19 trillion. In dollar terms, this is the largest increase in the national debt in U.S. history.

While the president will likely tout the short-term improvement in the deficit during his two terms in office, that fiscal figure must be considered in its proper context. The deficit fell from excessively high levels during and following the Great Recession, when Congress and Obama handed out Troubled Asset Relief Program (TARP) and stimulus money.

Since then, higher taxes, an improving economy, and minor fiscal restraint due to the Budget Control Act of 2011 are the main reasons for short-term deficit improvements. The president deserves little credit for this development.

Failed Leadership on Entitlement Reform. Back in 2008, when Obama was first running for president, he promised entitlement reform – to reform Social Security and Medicare – during his first term in office. The nation is still waiting for the president to keep that promise.

The president took a tiny step toward such reforms by establishing a National Fiscal Commission in 2010. Yet when the commission presented its recommendations, the president largely ignored them.

Instead, Obama used his presidential leadership to make things worse. Together with Congress, the president pushed through Obamacare on a purely partisan basis. The new healthcare law’s exchange subsidies and Medicaid expansion increased federal spending over the decade by about $2 trillion. And while the administration relied on a faulty budget score to claim that Obamacare would add not a single penny to the deficit, we now know that this is false and was never true to begin with.

Busting Through the Bipartisan Budget Caps. Debt limit negotiations between Obama and Congress in 2011 led to The Budget Control Act. This law brought back spending caps on the discretionary budget and tasked a super-committee with finding additional savings.

When the Congressional super-committee failed to agree to at least $1.2 trillion in cumulative deficit-reduction, the Budget Control Act (BCA)’s sequestration mechanism kicked in. Sequestration made automatic, across-the-board cuts to defense and domestic spending in 2013 and lowered the Budget Control Act’s caps from 2014 through 2021. These were savings that were mutually agreed to by both parties.

Obama and Congress never stayed below the spending caps. Every year Congress nourished the federal spending addiction by lifting the caps. From canceling sequestration cuts in 2013 that led to an additional $35 billion in spending to forging the Ryan-Murray budget deal, and now the Obama-Boehner Bipartisan Budget Act, discretionary spending was already raised by $174 billion.

Misleading Congress on the Debt Limit. For several years, the Obama administration has been repeating that it would be unworkable for the Treasury to prioritize principal and interest, and any other essential payments, during a debt limit standoff.

A new report by the House Financial Services Subcommittee on Oversight and Investigations staff last week revealed that Treasury was intentionally misleading Congress about the administration’s debt limit plans, in order to “maximize pressure on Congress” to advance Obama’s political agenda. It appears that Treasury officials and Obama were using the threat of default as a deliberate political tool in an attempt to push Congress to raise the debt limit on the administration’s terms.

And they succeeded. Today, the nation is more than $19 trillion in debt and Congress granted the administration another blank check to borrow with, called a debt limit suspension, through March 15, 2017.

And speaking of government intervention, the Obama administration wants to increase the number of IRS employees by 11 percent next year, to more than 91,000.  Targeting conservative advocacy groups, enforcing higher taxes, and assessing fines for individuals who lack health insurance apparently requires a lot of employees.

Fines on the uninsured make up a small portion of Obamacare’s new taxes. Other Obamacare taxes include adding the Medicare payroll tax to investment income, a tax on small businesses that provide health insurance, and a tax on medical devices (now delayed until 2018).  While delayed implementation downplayed the initial cost estimate, Obamacare tax increases are now estimated to be more than $1 trillion over the next 10 years.

On the international tax front, Obama has done little more than pay lip service to the need for reform to keep American businesses on American shores.  Rather than make America’s tax system more business-friendly, the Obama administration resorted to shaming American companies that embrace the competitive America spirit and tacking on additional regulations and financial penalties that make America all the less attractive to businesses across the globe.

If the Obama administration had its way, Americans would face another $1.7 trillion over 10 years in taxes and fees over the next 10 years, including a “fair share” tax, even higher capital gains taxes, reducing itemized deductions, increasing the tax burden on U.S. businesses operating abroad, a new bank tax, changing inventory accounting rules to tax inflationary gains, and raising estate and gift taxes, just to name a few.

The Obama Era Comes to An End

While spending and debt have been an issue for a while, Obama has made a bad fiscal situation unbelievably worse.

Early during his tenure, Obama emphasized addressing the deficit and debt by putting a fiscal commission in place and promising entitlement reform. Instead, the president pushed Obamacare and its higher spending through as healthcare reform. Moreover, every Obama budget has advocated for higher spending and higher taxes.

The Obama administration’s inability to address the nation’s key fiscal challenges means that it’s up to Congress and the next administration to dig out of the fiscal hole. It’s critical to the nation’s fiscal and economic health that Washington rise up to meet this challenge.