Senate in Turmoil Over Whether Obama Should Fill Scalia’s Seat 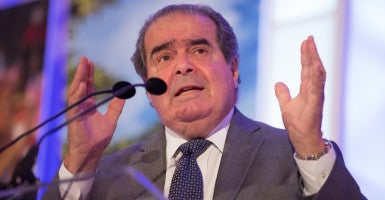 Republicans and Democrats are sniping over when to fill the Supreme Court seat of Justice Antonin Scalia, here at a Heritage Foundation event in October 2015. (Photo: Jeff Malet for The Daily Signal)

Lawmakers from both parties exchanged salvos Sunday over who should fill the Supreme Court seat vacated Saturday by the death of Justice Antonin Scalia.

After news of Scalia’s death, Senate Republicans quickly dug in, promising to block President Obama’s nominee to replace him.

Led by Majority Leader Sen. Mitch McConnell, R-Ky., they pledged to keep the high court seat open for the next president to fill in 2017.

But Democrats argue that, with more than 10 months left in office, it’s Obama’s constitutional prerogative to fill the seat even if it is an election year.

On the Sunday morning talk show circuit, Sen. Chuck Schumer, D-N.Y., accused McConnell of  “obstructionism” and said Republicans would back down.

The majority leader “doesn’t even know who the president is going to propose. And he says, ‘No, we’re not having hearings, we’re not going forward,’” Schumer told ABC’s George Stephanopoulos on “This Week.”

Schumer predicted “this kind of obstructionism isn’t going to last.”

Schumer, presumed to be the next leader of Senate Democrats, said “a lot of the mainstream Republicans” eventually would buck McConnell and support an Obama nominee to fill Scalia’s seat.

Whether or not the GOP conference cracks, Sen. Ted Cruz, R-Texas, a member of the Judiciary Committee, promised to “absolutely” filibuster any Obama nominee for the Supreme Court.

“The Senate has not confirmed a nominee that was named in the final year, an election year, in 80 years,” Cruz told Stephanopoulos. “This should be a decision for the people.”

Obama “certainly has the power to nominate someone,” Rubio said, but Senate Republicans have been “very clear.”

“We’re not moving on Supreme Court nominees until after this election,” he said.

>>> 9 Zingers From the Sharp Mind of Justice Antonin Scalia

Shortly after news broke of Scalia’s death at age 79,  Sen. Chuck Grassley, R-Iowa, raised the standard over the Republican position.

Grassley, chairman of the Judiciary Committee, which is charged with evaluating and voting first on judicial nominees, wrote:

Given the huge divide in the country, and the fact that this president, above all others, has made no bones about his goal to use the courts to circumvent Congress and push through his own agenda, it only makes sense that we defer to the American people, who will elect a new president to select the next Supreme Court justice.

The Supreme Court of the United States is too important to our democracy for it to be understaffed for partisan reasons.  It is only February. The president and the Senate should get to work without delay to nominate, consider and confirm the next justice to serve on the Supreme Court.

In recess until Feb. 22, Senate Democrats and Republicans only can fire off sound bytes until the chamber reconvenes.

“I strongly disagree with that,” Sen. Bernie Sanders, I-Vt., who caucuses with the Democrats, said Saturday night of the Republican calls for delay.

During the break, Republicans will be unable to completely block Obama’s pass on any judicial nominee. And the president could airdrop a temporary justice onto the court.

Saturday night, Obama promised to make his nomination “in due time.” Fox News’ Chad Pergram reported the president could make a recess appointment without Senate approval.

With the Senate and the House adjourned until Feb. 22 and 23, respectively, Obama preemptively could deploy his constitutional powers. Article II, Section 2 states that “the president shall have power to fill up all vacancies that may happen during the recess of the Senate.”

On the court, Scalia’s absence leaves the eight remaining justices at risk of a 4-4 split and at an impasse on cases before it. That places a queue of controversial cases in legal limbo.

In one, Friedrichs v. California Teachers Association, Scalia was expected to lead the court in ruling against the ability of public sector unions to impose union fees on non members.

Scalia also was expected to tip the balance in favor of the Little Sisters of the Poor. That order of Catholic nuns is challenging Obamacare’s so-called contraception mandate, which requires employers to cover abortion-inducing drugs along with other contraceptives in health plans.

In the event of a tie on the Supreme Court, the decision of the lower court on the case takes precedent.

This story was updated to correct Schumer’s party affiliation.