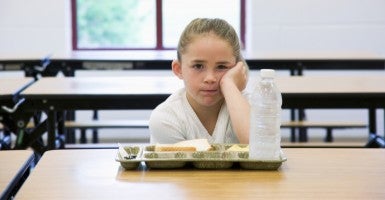 Healthier lunches have become available in schools across the nation.

But students aren’t eating them.

According to a new Johns Hopkins Bloomberg School of Public Health study, “Nearly 6 in 10 [students] put a vegetable on their tray, but only a quarter actually eat even a single bite.”

The researchers observed the eating habits of 274 children in 10 New York City public schools. The students were in kindergarten through second grade.

According to the press release, researchers “watched to see whether each of the six-through-eight-year-olds chose a fruit, vegetable, whole grain, low-fat milk and/or a lean protein, taking before and after photos of the trays.” They discovered:

Researchers also noted that there are several factors that influenced how much food the students ate, such as the presence or absence of their teacher, the noise level in the cafeteria, the length of the lunch period and even the size the pieces of food had been cut into.

According to Daren Bakst, a research fellow in agricultural policy at The Heritage Foundation:

This study simply supports what school nutrition officials have been saying.  There’s major food waste.  It’s difficult to conclude that a law called the Healthy, Hunger-Free Kids Act is a success when the kids are hungry—you can’t be healthy if you are hungry all the time.  Getting the kids to eat should first and foremost be the primary concern.

However, the entire debate surrounding the new school nutrition standards often misses a fundamental question.  Do we need federal bureaucrats and Michelle Obama to dictate how kids should eat through this program, or should parents, possibly along with local governments, make decisions regarding nutrition?  Specifically, it is a question of whether we respect federal bureaucrats and their one-size-fits-all approach more than parents who know the best interests of their children.