Why Asia’s Economic Miracle May Be Ending 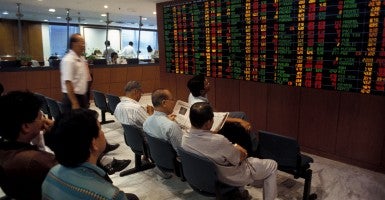 Historically, economics has often driven the narrative surrounding presidential visits to Asia. Consider President Obama’s 2009 trip to China in the midst of the global financial crisis. It gave wings to a narrative about China’s rise and American decline.

The economic environment may be changing again. Only this time, the change is less dramatic and occurring largely out of the headlines.

Over the last four decades, Asia has been home to the world’s fastest growing economies. After a brutal financial crisis and recession in the late 1990s, Asian growth resuscitated and, in 2012, reached an amazing milestone when its share of global GDP hit 30 percent. Asia’s contribution to global growth has been even greater in recent years.

Despite the robust growth, however, there are reasons to believe the regional economy is not as healthy as it appears on the surface. Demographic trends, faltering exports, slowing growth in China and a credit bubble—all suggest that Asia’s economic miracle has peaked.

Asia was the only region to sail relatively unscathed through the 2008 global recession. Unfortunately, this growth spurt was financed with an enormous credit binge.

– For Asia, total debt (household, corporate, government) reached a new high last year, running 208 percent of GDP. That is up a startling 50 percentage points since 2008.

Credit intensity—the amount of borrowing needed to generate a unit of output—has surged, while productivity growth has tumbled. More and more debt is needed to generate one percentage point of GDP growth. In short, economic growth has become highly credit dependent. According to Bloomberg, Australia, Hong Kong, South Korea, China, Malaysia, Thailand and Taiwan have private debt ratios between 150-200 percent of GDP.

Much of the rise in debt is corporate. While Western companies have been deleveraging since the 2008 financial crisis, Asian companies have been doing the opposite. In fact, corporate Asia now has the world’s most leveraged balance sheets. According to Standard & Poor’s, corporate debt in Asia will exceed that of North America and Europe combined by 2016. China surpassed the United States in outstanding corporate debt last year, amounting to $14.2 trillion. Moreover, the credit quality of Asian corporate debt is much lower than that in the West.

Asian household debt has also been surging. According to Frederic Neumann, a managing director and senior economist at HSBC Holdings plc, credit growth in Singapore and Thailand exceeded that of the U.S. during its credit boom last decade. Meanwhile, Malaysia, China, Hong Kong and Korea have seen a bigger increase than the United Kingdom experienced during the 2001-2007 debt surge before the financial crisis.

While Asian exports have undergone steep declines when global economic conditions deteriorated (like during the 1997 Asian financial crisis, and the 2001 and 2008 global recessions), they have always quickly rebounded to double-digit growth whenever global growth returned.

Among Asia’s four export powerhouses—China, Japan, South Korea and Taiwan—export growth has declined dramatically since 2010 and is barely growing despite modest global growth.

Subdued consumer spending in the United States is partially responsible for the slowdown. According to the Wall Street Journal, U.S. imports from China, Japan, South Korea and Taiwan only grew 1 percent in 2013, down from 13 percent in 2004. Another reason for the export slump is structural.

Higher wages and slowing productivity have made Japan, South Korea and Taiwan less competitive as a manufacturing hub. In fact, Japan is expected to manufacture more cars outside of Japan than domestically next year for the first time in history. Even China’s decade of double-digit wage growth is causing it to lose lower-end manufacturing to less costly countries like Vietnam and the Philippines.

Demography: From Dividend to Deficit

Recently, most economists have come to the view that the changing age structure of the population, rather than population growth itself, can significantly alter economic development.

Developing countries with demographics trending toward more working-age citizens have a unique chance to convert this “demographic dividend” into higher growth. Unfortunately, this demographic shift creates only one window of opportunity. Low fertility rates eventually lead to a rising proportion of older people, raising the dependency ratio as the working population goes from caring for children to caring for parents and grandparents.

Over the last thirty years, Asia enjoyed the largest demographic dividend of any region in the world. Its dependency ratio fell from 72.8 percent in 1980 to 47 percent in 2013. The fall in East Asia was just as profound (falling from 65 percent to 38 percent over the same period). Some analysts estimate that a quarter of Asia’s economic growth over the past fifty years has come from its favorable demographic trends. By 2030, however, the dependency ratio is expected to rise to almost 50 percent in Asia (on the bright side, India has just started its demographic dividend).

This reversal is due to a protracted fall in the fertility rate and an increase in life expectancy. Asia’s fertility rate has fallen from 5.8 births per woman in 1960 to just 2.1 today. In East Asia, it is only 1.7. Asia is now entering the early stages of a “demographic deficit,” which will retard its economic growth in the coming years and decades.

China is now the largest trading partner for eighteen Asian nations and accounts for 45 percent of the region’s GDP. It is the world’s second largest importer and consumes 40, 30 and 25 percent of exports from Taiwan, Australia and South Korea, respectively. Its enormous stimulus package, deployed during and after the 2008 recession, supported growth across the continent. It came, however, at a cost: Total Chinese debt rose from 100 percent of GDP in 2008 to an estimated 250 percent today.

In recent years, real GDP growth has slowed to 7 percent annually, from 10 percent. Odds are the coming decade will bring even slower growth. According to the IMF, if China’s investment share of GDP falls from 50 to 40 percent, it could reduce GDP by 1 or 2 percent in the Philippines and Indonesia, 4 to 6 percent in Malaysia, Korea and Thailand, and 10 percent in Taiwan. There would also be additional multiplier impacts to growth throughout the region.

Regional exports to China could be reduced for another reason as well. China’s growth is becoming less commodity-intensive. In fact, this year for the first time, China’s service sector surpassed in size the manufacturing and construction sectors combined.

Asia has already entered a period of slower growth. Excluding China, growth has cooled to 5.5 percent recently, half of the peak rate achieved in 2007. Favorable demographics and surging exports will no longer be a significant source of growth. Asia cannot continue leveraging with debt to support growth. The only answer is stronger productivity growth, but that will require structural reforms to the economy. It is not clear that the political will to reform is present in the countries that need it most.

It is not 2009. President Obama sets out for Asia against a very different economic backdrop than he did then. The future of the region’s economy looks much dimmer today, and Obama would do well to use that to America’s advantage. By conveying a sense of confidence and American staying power in his discussions with regional leaders, he could make much progress on a wide range of policy issues.