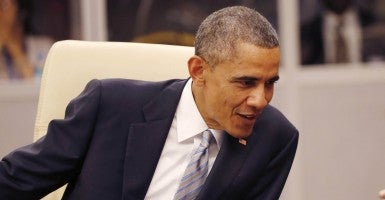 Will the Federal Communications Commission tax the Internet?

The tax, which could total over $7 per month on the typical American’s broadband bill, would be imposed as a consequence of regulating the internet via “net neutrality” rules that President Obama has urged the FCC to adopt.

Under Obama’s plan, Internet access providers–such as Verizon, AT&T and Comcast–would be declared to be common carriers providing “telecommunications services.” This would place those companies under comprehensive regulation by the FCC.

The negative consequences of such burdensome regulations to innovation and to investment are well-known. But the move would also mean that the companies would also have to pay a portion of their Internet revenue to the FCC’s “Universal Service Fund (USF),” which provides subsidies for Internet service.   This fee currently is set at 16.1 percent of revenue, or $7.25 per subscriber per month according to one estimate.

And don’t look for the FCC to waive this new found windfall. O’Reilly (who opposes the plan) reports the FCC already is planning a “spending spree” on USF subsidies.

This new tax comes at an ironic time, O’Reilly pointed out, given that Congress is now considering renewal of its moratorium on state Internet taxes. But the FCC has no plans to ask Congress to vote on this matter, as it claims it has the power to move forward without legislative approval.

Just one more reason why the FCC should not regulate the Internet.