Obama (Probably) Just Made a Military Deal With the Chinese. We Have the Details. 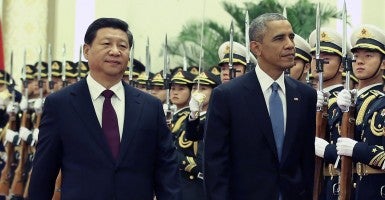 Chinese President Xi Jinping holds a welcoming ceremony for President Obama at the Great Hall of the People in Beijing on Nov. 12, 2014. (Photo: Xinhua/Pang Xinglei)

While the Obama administration has been trumpeting an agreement by both sides to limit greenhouse gas emissions, news reports suggest that an agreement also was reached to limit the prospects of military confrontation. This would entail prior notification to each other of military exercises, as well as yet another attempt to codify how the two sides should behave in the event of a close encounter.

Direct comparisons have been made to the Cold War-era “Incidents at Sea” agreement between the U.S. and the Soviet Union. Prior to the 1972 “INCSEA” agreement, U.S. and Soviet naval and air forces regularly confronted each other in dangerous maneuvers, leading to collisions and some deaths. Armed Soviet bombers flew over U.S. aircraft carriers and were often intercepted by armed U.S. fighters flying in close proximity.

The possibility of an accident precipitating an unintended conflict led to the “INCSEA” agreements, whereby both sides minimized such dangerous behavior, largely maintaining safe distances from each other. (Even then, there were still incidents such as the ramming of the USS Caron in the Black Sea in 1988.)

These new measures also sound very much like the agreement between the U.S. Department of Defense and the Chinese Ministry of National Defense in establishing the Military Maritime Consultative Agreement in 1998 and the Code for Unplanned Encounters at Sea that was established among the Western Pacific navies in 2014. Both are supposed to prevent unsafe behaviors and provide mechanisms for parties to an incident to talk to each other.

The earlier agreement did not prevent the Chinese from precipitating the EP-3 collision in 2001. Or the 2009 incidents involving the USNS Impeccable, the USNS Victorious and the USS John S. McCain III. Or the 2013 incident involving the USS Cowpens. The more recent agreement did not prevent the Chinese from running down Vietnamese fishing boats in the dispute over a Chinese oil rig earlier this year. Or stop a Chinese pilot from conducting a roll over a U.S. P-8 patrol aircraft. The Chinese typically do not put hotlines and communications channels to use in such incidents.

It remains to be seen what modifications, if any, in Chinese behavior this iteration leads to—and what the United States offered China in return.