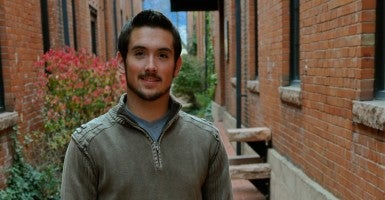 A Colorado high school banned a group of students from praying, singing Christian songs, and discussing religious topics in their free time.

Citing “separation of church and state,” officials at Pine Creek High School told Chase Windebank, a senior, that he and his classmates no longer were allowed to use an unoccupied choir room for religious purposes.

Windebank and some classmates at Pine Creek High School,  north of Colorado Springs, had been holding meeting for prayer for three years during free time.

The school grants students such as Windebank, who are in good academic standing, permission to leave during the second half of their homeroom seminar. While other classmates spent that time reading, studying, texting, snacking, socializing, or meeting in school clubs, Windebank held a prayer group. After Assistant Principal James Lucas told Windebank on Sept. 29 that he could hold his prayer meetings only before or after school hours, he consulted lawyers at Alliance Defending Freedom, seeking protection of his right to freedom of religion and speech.

Alliance Defending Freedom filed a federal lawsuit Friday in the U.S. District Court for the District of Colorado on Windebank’s behalf.

“Public schools should encourage the free exchange of ideas. Instead, this school implemented an ill-conceived ban that singles out religious speech for censorship during free time,” Jeremy Tedesco, senior legal counsel, said.

Academy School District No. 20 and its legal counsel support Pine Creek’s decision to prohibit Windebank from holding his prayer group.

In a statement to The Daily Signal, a spokeswoman for the school district said that to continue holding his meetings, Windebank must do so during “non-instructional” hours:

Matt Sharp, legal counsel with Alliance Defending Freedom, said public schools have “no business” stopping students from praying together during free time. Religious speech, he said, is “expressly protected by the First Amendment.”