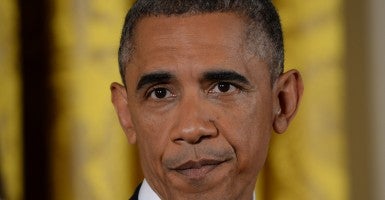 President Obama at his Nov. 5 press conference on the results of the midterm elections. (Photo: Christy Bowe/Polaris)

Aides to conservative members of the U.S. Senate say their bosses are rallying around a strategy to prevent President Obama from taking executive action to allow illegal immigrants to stay in the country: Use government funding bills to withhold the money the president needs to implement his plan.

At the same time, some of the Senate’s most conservative members are worried that party leadership could try to strike a deal with Democrats in the lame-duck session on a longer-term spending agreement that could limit lawmakers’ ability to defund whatever Obama decides to do.

In a series of interviews with The Daily Signal, conservative Senate staffers said their lawmakers firmly oppose Obama’s acting on his own to defer or delay deportation for millions of illegal immigrants. However, they are open to supporting a piecemeal approach on immigration policy that would emphasize border security first.

The results of this week’s election — where Republicans took control of the Senate and picked up seats in the House with a platform opposed to unilateral action by the president to allow illegal immigrants to stay and work — only emboldened their will to fight it, the Senate staffers said. “We know this issue motivates voters,” one aide said:

This election is validation for that. Voters don’t support amnesty and expanding DACA. It’s one of the only issues that is at the cross section of the economy and national security. We should not run from it. We should embrace it.

DACA, or Deferred Action for Childhood Arrivals, is the Obama administration program delaying deportation of illegal immigrants who were brought to America as children.

Although GOP leadership in the House and Senate have spoken firmly against Obama’s plan to overhaul the immigration system — which the president confirmed Wednesday would come before the end of the year — conservatives question whether leadership’s words will be backed by action.

In a press conference yesterday in Washington, House Speaker John Boehner offered a stark warning that Obama not act alone.

“When you play with matches you take the risk of burning yourself and [Obama] is going to burn himself if he continues down this path,” Boehner said. Senate Minority Leader Mitch McConnell of Kentucky, all but certain to become majority leader in January, supplied his own analogy regarding unilateral action by Obama.

“It’s like waving a red flag in front of a bull,” he told reporters in Louisville the day after his re-election in the Republican wave.

In an interview with Time magazine, McConnell said he supported conservatives’ strategy to “push back on executive overreach through the funding process.”

>>> Commentary: The Right Way to Reform Our Immigration System

But conservatives worry that an impatient public, tired of congressional gridlock, may push party leaders to strike conciliatory deals in an effort to show Republicans can govern.

One point of contention:  how to approach the lame-duck period before the new Congress begins work in January.

A stopgap spending measure to fund the government expires Dec. 11, and Democrats and some Republicans want to end the pattern of short-term, fiscal-cliff budgeting that has defined the past few years.

Last month, House Majority Leader Kevin McCarthy told Politico that he would like to use the lame-duck session to pass a long-term government-funding bill.

“That would be very unhelpful,” a second GOP Senate aide said. “You are giving up all leverage to stop the administrative actions that you disagree with.”

The Daily Signal agreed not to identify the aides to senators so that they could speak bluntly about their bosses’ concerns.

The White House may wait until after a spending bill clears Congress to announce changes in immigration policy. That’s why conservatives believe that agreeing to a long-term funding measure — one that lasts until Oct. 1 of next year — would lock into place funding for Obama’s program.

“I don’t think he will do this right after the election,” a third Senate aide said of Obama:

Because he knows we will make it an issue in the lame duck, and we have the momentum. There’s no reason to pass a long-term bill with a bunch of senators who won’t be there [after January].

Conservatives prefer short-term funding, probably through February, so they can come back to the spending fight early next year. Then, in full control of the process, they could begin withholding funding the president would need to implement  immigration changes made without Congress.

So, for example, when an appropriations bill for an individual agency such as the Department of Homeland Security goes through Congress, lawmakers would provide no funds for an activity such as issuance of a specific number of work permits.

“I would be shocked if there’s anything but a short-term [bill], a fourth conservative Senate staffer said. “We can be very precise with it [in deciding what and how to defund immigration-related activities]. Ultimately, I don’t think McConnell will endorse a moderate view on immigration.” As part of an emergency spending package to address the border crisis this summer, the House passed a bill offered by Rep. Marsha Blackburn, R-Tenn., that said the president cannot renew or expand DACA. It effectively ended the program.

If tying the immigration issue to a must-pass spending bill becomes too politically charged, conservatives could try to pass standalone legislation such as Blackburn’s — or something similar.

Although Obama never would sign such a bill, the conservative Senate staffers argue that it’s important to force Democrats to weigh in on immigration.

“Knowing that next year the president will have no political limitations and we won’t be able to stop him, we have to make it as painful as possible for Democrats to vote for it,” the first Senate aide said.

We will push very hard to make sure we get a number of opportunities to put Democrats on the record about every aspect of this issue — from the substance of what he does to the funding for it. The metric is not to force the president to do something. We want people to know who supports amnesty and who doesn’t.

Instead of stopping Obama’s unilateral action on immigration policy, Republicans could bring forward their own ideas.

Obama said Wednesday that he still wants Congress to pass comprehensive legislation to reform the immigration system. He promised that if Congress passes a bill, it would make executive actions “go away.”

Congress has had chances to do so.

More than a year ago, the Democratic-led Senate passed a comprehensive bill to clear the way for millions of illegal immigrants to move toward citizenship.

The House leadership refused to move that bill or a similar one to a vote, with many members calling it amnesty.

Mitt Romney, the party’s 2012 presidential nominee, recently has speculated openly that a Republican-controlled Senate would mean passage of a conservative immigration reform bill.

>>> ‘We’re Going to Get It Done,’ Romney Says of Immigration Action in Republican-Led Senate Boehner seemed to stagger on the issue during yesterday’s press conference.

The House speaker first said that if Obama acts on his own, he will “poison the well” and “there will be no chance of immigration reform moving in this Congress.”

Later, however, he said: “It is time for Congress to take care of a very difficult issue in our society.”

“It is just time to deal with it,” Boehner said, ending  his comments on immigration by telling reporters, “Hope springs eternal.”

If a vote were taken today, the conservative Senate aides doubt comprehensive legislation could pass either chamber. They point to the volatility of the border crisis during the summer, when thousands of unaccompanied children from Central America illegally entered the country.

“The Senate passed something. The House didn’t want it,” the fourth Senate aide said. “Congress has spoken on comprehensive immigration reform.”

Still, lawmakers may try to complete smaller-scale bills that would address issues in the immigration system individually, as House members proceeded to do last year.

But ultimately, for lawmakers who feel slighted by what they view as excessive use of independent presidential authority, the preferred action might be to just say no.

“The whole message of the next Congress will be restoration of congressional power,” the fourth staffer said.

Note: This article has been modified to characterize more clearly the president’s potential action.