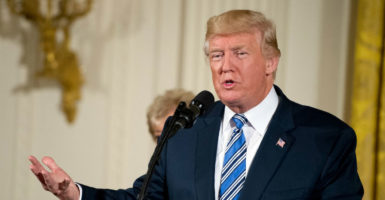 The RAISE Act would limit future chain migration, allowing only nuclear families of migrants to come to the United States. (Photo: iStock Photos)

Low-skill immigration is very costly to U.S. taxpayers. For example, a legal immigrant without a high school degree typically receives $4 in government benefits for every $1 he pays in taxes.

By limiting future low-skill immigration, the RAISE Act has the potential to save U.S. taxpayers trillions of dollars in future years.

The $150 billion tax burden is equivalent to a $1.04 tax on every gallon of gas purchased by U.S. motorists every year for the foreseeable future.

The RAISE Act seeks to curtail future fiscal costs linked to low-skill immigration by eliminating chain migration, the visa lottery, and the current low-skill worker allotment. It also caps the future flow of refugees and asylees.

Nearly 400,000 legal immigrants enter the U.S. through these channels each year. The majority of these appear to be low-skill.

The bill’s reforms to chain migration are particularly important.

Chain migration starts with a foreign citizen who is given a green card. This individual is allowed to bring in his or her nuclear family consisting of a spouse and minor children.

Once the original immigrant and his or her spouse become U.S. citizens, they can petition for their parents, adult sons and daughters, and adult siblings and brothers- and sisters-in-law to also enter.

This second group can bring their minor children. Once they become citizens, the brothers- and sisters-in-law and parents can petition for their siblings, in-laws, and parents to legally enter the U.S.

Parents can be brought to the country on a guest visa but will not be given access to government benefits or citizenship status. The sponsors must demonstrate that they have purchased insurance to cover the future medical costs of the parent.

In order to determine the fiscal cost of low-skill immigrants, it is important to count the cost of all government benefits and services received minus the value taxes paid.

This type of holistic analysis was presented by the National Academy of Sciences in its major report, “The Economic and Fiscal Consequences of Immigration,” released in September of last year.

The report estimated the costs of government benefits and services received by immigrants and non-immigrants from federal state and local government.

The report’s calculation of government benefits is comprehensive—it includes routine government services such as police and fire protection, highways and sewers; public education costs; benefits from over 80 means-tested welfare programs such as Medicaid, food stamps, the earned income tax credit, and housing vouchers; and other government direct benefits, including Social Security, Medicare, and unemployment insurance.

The report shows that less educated individuals, whether immigrants or non-immigrants, receive far more in government benefits than they pay in taxes.

In particular, the report provides 75-year projections for the fiscal balance of immigrants and their immediate descendants based on the immigrant’s education level. It measures future cost in “net present value.”

The concept of “net present value” is complex. It places a much lower value on future expenditures than on current expenditures.

One way to grasp net present value is that it represents the total amount of money that the government would have to raise today and put in a bank account earning interest at 3 percent above the inflation rate in order to cover future costs.

Based on the National Academy of Sciences’ estimates, the average low-skill immigrant (with a high school degree or less) who enters the country imposes a net present value on taxpayers of negative $142,000.

This means the government would need to immediately raise a lump sum of $142,000 and put it in a high-yield bank account to cover the future net fiscal cost (total benefits minus total taxes) of that immigrant.

Converting a net present value figure into future outlays requires information on the exact distribution of costs over time. That data is not provided by the National Academy of Sciences.

However, a rough estimate of the future net outlays to be paid by taxpayers (in constant 2012 dollars) for low-skill immigrants appears to be around $397,000 per immigrant over 75 years.

The National Academy of Sciences’ cost figures represent a mixture of costs for legal and illegal immigrants. The RAISE Act is focused directly on low-skill legal immigrants.

Since low-skill legal immigrants receive more benefits, their fiscal impact is greater than similar illegal immigrants. The net present value for a legal immigrant with a high school degree or less is around negative $170,000, and the undiscounted long-term fiscal cost (benefits minus taxes) would be around $476,000 in constant 2012 dollars.

Over the last decade and a half, an average of 470,000 low-skill adult immigrants (both legal and illegal) have arrived in the U.S. each year. The net present value of this inflow is around negative $67 billion per year.

In other words, to cover the future cost of one year’s inflow of low-skill immigrants, the government would need to immediately raise taxes by a lump sum of $67 billion, put the money in the bank earning interest at the inflation rate plus 3 percent, and use the interest and principal to cover long-term costs. (Sixty-seven billion dollars equals around $800 for each U.S. household currently paying federal income tax.)

Fiscal costs can also be analyzed per decade. Under existing government laws and policies, an estimated 4.7 million low-skill immigrants (both legal and illegal) are likely to enter the U.S. over the next decade.

The fiscal net present values of these immigrants to the taxpayers will be around negative $670 billion. In other words, government would need to immediately raise taxes by $670 billion to cover the future costs.

Of course, the government will not actually raise taxes in this manner—instead, the future costs will be hidden and passed on to future taxpayers.

The future net outlays (benefits given less taxes paid) for the inflow of 4.7 million low-skill immigrants will be around $1.9 trillion (in constant 2012 dollars).

Over half these costs are linked to future low-skill legal immigration. By limiting future legal low-skill immigration, the RAISE Act could save at least $1 trillion.

Opponents of such reforms argue that such immigration increases the gross domestic product.

It is true that immigration increases the GDP, but as Harvard immigration economist George Borjas explains, 98 percent of the increase “goes to the immigrants themselves in the form of wages and benefits.”

Metaphorically speaking, low-skill immigrants increase the economic pie, but they eat nearly all the increase themselves.

Finally, low-skill immigration shifts the political balance in the nation.

According to Cooperative Congressional Election Survey, the political alignment of immigrants is far to the left that of non-immigrants. Immigrants in general are twice as likely to identify with and register as Democrats than as Republicans.

This pattern is somewhat more pronounced among immigrants without a high school degree who are almost three times as likely to register as Democrats than as Republicans.

Low-skill immigration imposes large fiscal costs on U.S. taxpayers. It drives down the wages and employment of the disadvantaged American workers (especially black males), and it arbitrarily shifts the political balance in the U.S.

The RAISE Act would appropriately address these problems.