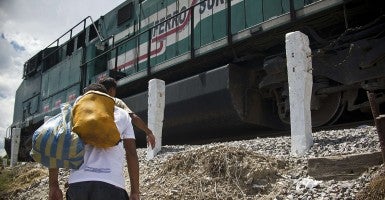 Central Americans walk to a cargo train called "The Beast" in their attempt to reach the U.S. border with Mexico. (Photo: Newscom)

House Republicans worked overtime last night to pass two bills addressing the border crisis — measures all but certain to die in the Senate  — hours after President Obama threatened to act on his own.

“I’m gonna have to act alone,” Obama told reporters during an afternoon briefing, dismissing the House’s emergency spending bill in response to the surge of unaccompanied children from Central America as “extreme” and “unworkable.” The president added:

I have already been very clear. We will run out of money. We’re going to have to reallocate some resources so we can do basic functions, whether it’s making sure kids are properly housed or that there enough immigration judges to hear their cases.

In a 223-189 vote late last night, however, the House passed a revision of  legislation Speaker John A. Boehner dramatically pulled from consideration Thursday because of opposition from conservatives.

More dramatically, the House voted 216-192 on a separate bill to stop Obama’s Deferred Action for Childhood Arrivals program, or DACA, which the president implemented in 2012. Republican leaders blame its deferred deportations for certain young illegal immigrants for the sudden flood of Central American child migrants to the Texas border with Mexico.

This second bill, sponsored by Rep. Marsha Blackburn, R-Tenn., states that the president cannot renew or expand DACA — effectively ending it and clearing the way for eventual deportation of children brought here illegally.  Conservatives who opposed the earlier version of the border spending bill said lack of action on DACA would be a deal-breaker.

In an interview with The Daily Signal, one leading immigration enforcement official yesterday called for action to make it easier to quickly deport children who arrive in the country illegally.

“They are housing more people than they anticipated,” said Chris Crane, president of the union that represents Immigration and Customs Enforcement officers. “It’s a cheaper alternative by far to put them on an airplane and send them back to family members in their home country.”

The Republican-led House’s revised, $694 million bill includes $70 million to deploy the National Guard and tweaks a 2008 human-trafficking law to allow for quick return of the unaccompanied minors to their home countries.

The Democrat-controlled Senate adjourned Thursday and left Capitol Hill for the August recess without passing a border spending bill.

Michael Needham, chief executive officer of Heritage Action for America, the lobbying arm of The Heritage Foundation, called it a “good night” for House Republicans:

Not only did they demonstrate an ability to achieve Republican unity on an important, high-profile issue, but they did so by working with conservatives.  They have sent a strong message that they are ready to solve the crisis along our southwest border, which includes addressing the cause — President Obama’s unlawful DACA program.

The House spending plan is considerably short of the $2.7 billion proposed by Democrats led by Senate Majority Leader Harry Reid and the $3.7 billion Obama had requested to respond to the border crisis.

Democrats have said they will not approve any changes to the 2008 law, which guarantees children here illegally from Central America an appointment with an immigration judge.

Obama had expressed a willingness to adjust the law, but his spending request did not include such a provision. He denounced House Republicans yesterday from the podium of the White House press room:

They are not trying to solve the problem. This is just a message bill so they can check a box before leaving town for a month. While they are out on vacation, I will have to make tough choices with or without Congress.

“The House negotiated and ultimately passed good legislation,” said Rep. Jim Bridenstine, R-Okla., who has tustled with federal officials over a detention facility in his district:

The House has acted to end this crisis.  It is now time for Senator Reid and President Obama to do their jobs.

Crane, president of the National ICE Council union, said the surge of children to the southern border from Guatemala, Honduras, and El Salvador has become too much to manage.

ICE is the federal agency responsible for detention of illegal immigrants. In July, it had to convert an adult detention center in Karnes County, Texas, to house migrant families because of a shortage of bed space elsewhere.

“There would definitely be added costs to [speeding the deportation of unaccompanied minors], but you can’t have hundreds and thousands of kids coming across the border without incurring additional costs,” Crane told The Daily Signal.

Besides funds for the National Guard, the House spending bill provides: