States Have Legal Authority to Quarantine Citizens Exposed to Ebola 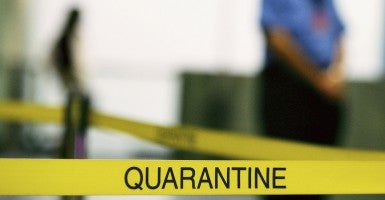 Lost in the debate about whether New Jersey or Maine should enact quarantine against a nurse who just returned from treating Ebola patients in West Africa is the law as it pertains to quarantines at the state level.

Setting aside the politics of a state government enacting quarantine, or the heavy-handed lectures from the White House pushing states not to enact state-based quarantines, the actual legal authority of a state to enact quarantine under certain conditions is clear.

The Supreme Court of the United States has long recognized the power of states to enact and enforce laws that provide for quarantine of persons infected or exposed to a disease to protect the people of the states from the spread of the disease. The only exception is if  Congress has enacted a law displacing such state law, using the exercise of the congressional power to regulate interstate, foreign or tribal commerce.

In 1902, the Supreme Court wrote in Vapeur v State Board of Health, “That from an early day the power of the states to enact and enforce quarantine laws for the safety and the protection of the health of their inhabitants has been recognized by Congress, is beyond question.  That until Congress has exercised its power on the subject, such state quarantine laws and state laws for the purpose of preventing, eradicating, or controlling the spread of contagious or infectious diseases, are not repugnant to the Constitution of the United States, although their operation affects interstate or foreign commerce, is not an open question.”

The power to enact quarantine laws derives from a state’s police power.  In 1947, in the case of Ex Parte Fowler, the Oklahoma Court of Appeals stated that “the adoption of laws for the protection of public health is universally considered to be a valid exercise of the police power of the State as to which the Legislature is necessarily vest with large discretion, not only in determining what are contagious and infectious diseases, but also in adopting means for preventing the spread thereof.”

As Northwestern University Law Professor Eugene Kontorovich wrote recently, “A quarantine is by definition a prophylactic measure that applies to those who are not necessarily sick or infected.” Courts have upheld state quarantines for all ships coming to New Orleans via the Mississippi, for a person who came to the United States from a smallpox infected area and in other instances when a person or class of persons either has a dangerous communicable disease or has been exposed to such.

Under the Public Health Service Act, Congress gave the Secretary of Health and Human Services authority to fight disease, including imposing isolation or quarantine to control epidemics of any disease.  That law gives the Surgeon General the power to issue regulations necessary to prevent “the introduction, transmission, or spread of communicable diseases from foreign countries into the States or possessions, or from one State or possession into any other State or possession.”  Section 311(a) of the Act directs the Secretary to “cooperate with and aid State and local authorities in the enforcement of their quarantine and other health regulations.”

The Centers for Disease Control interim guidance issued on Oct. 27(later updated on Oct. 29) states, in relevant part, that the “CDC recognizes that state and local jurisdictions may make decisions about isolation, other public health orders and active (or direct active) monitoring that imposes a greater level of restriction than what is recommended by federal guidance, and that decisions and criteria to use such public health measures may differ by jurisdiction.”  In other words, a state may impose greater restrictions on people exposed to Ebola than the federal guidelines.

There is a vibrant debate among legal scholars, including on the legal blog The Volokh Conspiracy, about the scope of the state quarantines and potential due process challenges to state Ebola quarantines.

But the states’ legal authority to enact an Ebola quarantine is beyond question.  Those subject to the state quarantine may sue in state court for relief.  But a state judge, in balancing the liberty interest of the quarantined person against the very real dangers of Ebola and the government’s interest, will be hard pressed to rule against the government, absent compelling facts.