Leftism Is Not Liberalism. Here Are the Differences. 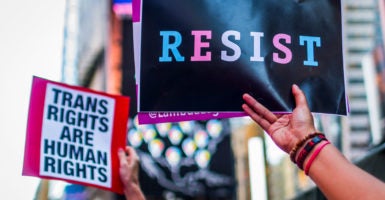 Leftism has little in common with liberalism, though the left often succeeds in claiming the "liberal" label. (Photo: Michael Nigro/Pacific Press/Newscom)

What is the difference between a leftist and a liberal?

Answering this question is vital to understanding the crisis facing America and the West today. Yet few seem able to do it. I offer the following as a guide.

Here’s the first thing to know: The two have almost nothing in common.

On the contrary, liberalism has far more in common with conservatism than it does with leftism. The left has appropriated the word “liberal” so effectively that almost everyone—liberals, leftists, and conservatives—thinks they are synonymous.

But they aren’t. Let’s look at some important examples.

Race: This is perhaps the most obvious of the many moral differences between liberalism and leftism.

Thus, the University of California officially regards the statement, “There is only one race, the human race,” as racist.

For that reason, liberals were passionately committed to racial integration. Liberals should be sickened by the existence of black dormitories and separate black graduations on university campuses.

Capitalism: Liberals have always been pro-capitalism, recognizing it for what it is: the only economic means of lifting great numbers out of poverty.

Nationalism: Liberals deeply believed in the nation-state, whether their nation was the United States, Great Britain, or France.

The left has always opposed nationalism because leftism is rooted in class solidarity, not national solidarity. The left has contempt for nationalism, seeing in it intellectual and moral primitivism at best, and the road to fascism at worst.

Liberals always wanted to protect American sovereignty and borders. The notion of open borders would have struck a liberal as just as objectionable as it does a conservative.

It is emblematic of our time that the left-wing writers of Superman comics had Superman announce a few years ago, “I intend to speak before the United Nations tomorrow and inform them that I am renouncing my American citizenship.”

When the writers of Superman were liberal, Superman was not only an American but one who fought for “truth, justice, and the American way.” But in his announcement, he explained that motto is “not enough anymore.”

Watch American films from the 1930s through the 1950s and you will be watching overtly patriotic, America-celebrating films—virtually all produced, directed, and acted in by liberals.

To the left, America is essentially a racist, sexist, violent, homophobic, xenophobic, and Islamophobic country. The left around the world loathe America, and it is hard to imagine why the American left would differ in this one way from fellow leftists around the world.

Leftists often take offense at having their love of America doubted. But those left-wing descriptions of America are not the only reason to assume that the left has more contempt than love for America.

The left’s view of America was encapsulated in then-presidential candidate Barack Obama’s statement in 2008. “We are five days away from fundamentally transforming the United States of America,” he said.

Now, if you were to meet a man who said that he wanted to fundamentally transform his wife, or a woman who said that about her husband, would you assume that either loved their spouse? Of course not.

No one was more committed than American liberals to the famous statement, “I disapprove of what you say, but I will defend to the death your right to say it.”

Liberals still are. But the left is leading the first nationwide suppression of free speech in American history—from the universities to Google to almost every other institution and place of work.

It claims to only oppose hate speech. But protecting the right of person A to say what person B deems objectionable is the entire point of free speech.

No liberal would have joined the leftist Rev. Jesse Jackson in chanting at Stanford University: “Hey, hey. Ho, ho. Western civ has got to go.”

The most revered liberal in American history is probably former President Franklin Delano Roosevelt, who frequently cited the need to protect not just Western civilization but Christian civilization.

Judaism and Christianity: Liberals knew and appreciated the Judeo-Christian roots of American civilization. They themselves went to church or synagogue, or at the very least appreciated that most of their fellow Americans did.

The contempt that the left has—and has always had—for religion (except for Islam today) is not something with which a liberal would ever have identified.

If the left is not defeated, American and Western civilization will not survive. But the left will not be defeated until good liberals understand this and join the fight.

Dear liberals: Conservatives are not your enemy. The left is.