Why the US Can’t Trust Iran to Help Defeat ISIS 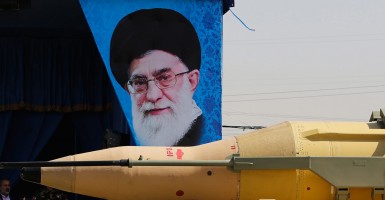 Suggestions have been floated that the U.S. should work with Iran to defeat the growing threat posed by the Islamic State (formerly known as ISIS or ISIL) in Iraq and Syria.  Advocates of strategic cooperation claim that Iran and the U.S. share some common national interests in preventing the rise of the Islamic State, which seeks to overthrow all of the governments of nearby countries and absorb them into its harsh vision of a global caliphate.

For example, Washington and Tehran in the past have shared common enemies in Iraq’s Saddam Hussein and the Taliban regime that ruled Afghanistan until 2001.  But Iran made little effort to help the United States defeat these enemies, because the regime regarded the United States, which it denounces as the “Great Satan,” to be its ultimate ideological enemy.

A grand bargain with Iran over Iraq is an illusion. Tehran and Washington have incompatible goals in Iraq.  While Washington seeks to help Iraqis build a stable democracy, Tehran wants to turn Iraq into a satellite state ruled by radical Shiite leaders that share its Islamist extremist ideology and hatred of the West.

Although al-Qaeda, the Sunni supremacist terrorist network, also poses a distinct threat to predominantly Shiite Iran, Tehran even found a way to cooperate with it. Tehran allowed al-Qaeda operatives based in Iran to launch terrorist attacks against Saudi Arabia, the United States and Canada.

The emergence of Al-Qaeda’s Khorasan group, which seeks to recruit Western militants drawn to the war in Syria for terrorist attacks against the United States and other Western countries, is another reminder of Iranian double-dealing.  The leader of the group, Mohsen al-Fadhli, operated for years as a senior al-Qaeda facilitator in Iran before moving to Syria.

Iran is a major part of the problem in both Iraq and Syria.  It has fueled sectarian hostilities between Sunnis and Shiites that created the conditions for the rise of the Islamic State.  Tehran has acted as arsonist and cannot be trusted to put out the fire.