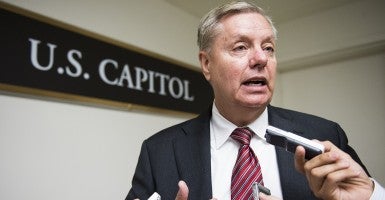 South Carolina Sen. Lindsey Graham, who is considering a run for president, was caught on tape at a private gathering this month saying, “White men who are in male-only clubs are going to do great in my presidency.”

In the meeting, Graham, a Republican, also joked about Baptists, saying “they’re the ones who drink and don’t admit it.”

After CNN contacted him, Graham said that he made the comments several weeks ago at a meeting of the Hibernian Society of Charleston, the Irish-Catholic charity organization.

Graham said the Hibernian Society encourages speakers “to be earthy, to make fun of yourself, to make fun of them. Then you say something serious and sit down. And if you talk over 20 minutes, they throw something at you.”

Graham told CNN he was making fun of the society’s all-male membership, joking that they are the lone organization that only admits men after Augusta National Golf Club admitted women.

Graham holds a sizeable lead in his re-election race against Democrat Brad Hutto.

The Daily Signal has reached out to Graham’s office for comment.