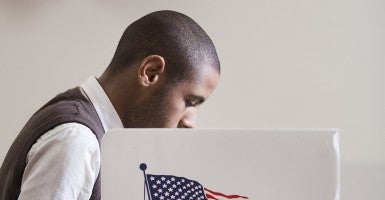 Half of Hispanics don’t think it matters who controls the senate after the November election, according to a new poll.

When asked. “If control of the Senate switched from the Democrats to the Republicans after this election, do you think that would be a good thing, a bad thing, or wouldn’t it make any difference?” thirty percent responded that GOP control of the senate would be a “good thing” and 15 percent said it would be a “bad thing” in a Washington Post/ABC News poll.

Fifty percent of Hispanics said it would make “no difference.”

Hispanics aren’t much more optimistic about the current state of affairs in the nation.

Forty-six percent of Hispanics approve of “the way Obama is handling his job as president,” and 50 percent disapprove of his job performance.

The Post notes thatHispanics are generally the least likely demographic to vote, and the numbers on the new poll “comport nicely with the idea of Hispanics’ declining faith in the Democratic Party:” “If you can’t get voters to believe something will change, it’s hard to make a convincing case to get them to vote,”Nia-Malika Henderson wrote.

The poll was conducted from Oct. 23 to 26, 2014, with a random sample of 1,204 adults. The overall results of the poll have a margin of error of three percentage points.