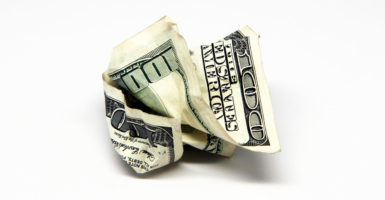 How do you begin addressing the U.S. government’s nearly $20 trillion debt? For one senator, the answer begins with wasteful spending.

In an interview with The Daily Signal on Monday, Sen. James Lankford, R-Okla., announced he would release the second edition of his “Federal Fumbles” report on Nov. 28. The first report, which exposed 100 wasteful government spending examples, was released in 2015.

Lankford is offering solutions for stopping the growing national debt, which has exploded under nearly eight years of Barack Obama’s presidency.

“I think [the national debt] is an enormous issue and a long-term issue for the nation,” Lankford told The Daily Signal. “It is something that affects our day-to-day economy.”

The first step to successfully address the problem, according to Lankford, is to build consensus among colleagues in the House and Senate.

“There is legislative work that needs to be done and we’re trying to identify the fellow senators and the House members to say, ‘Do we like this waste? No, we don’t. Let’s fix it. Here’s a solution to how we actually fix it,’” Lankford said.

The second step is to work with the next president to identify the myriad of areas where waste can be cut. Lankford explained:

[W]e are trying to identify [programs] and say, ‘Here’s what any administration can to do be able to step in and to be able to fix this wasteful spending.’ So, we identify a grant, for instance, that they should have never given or a regulation where it is clear that this regulation was something that was not within the statutes and the administration’s order to do. And so for all those, one after another, [we] try to identify who can fix it, whether it is Congress or whether it is the administration.

In creating a new “Federal Fumbles” report, Lankford said he and his colleagues gathered material for it during their day-to-day activities. Lankford said that as issues come to lawmakers’ attention throughout the legislative process, they are added to the government waste report.

The national debt is not only important to address because of its ramifications on the economy, Lankford said, but also national security.

By the beginning of the next decade, Lankford said, the U.S. government will be spending more on debt interest payments than national defense.

Lankford said he hopes that Americans see his report as a sign that not all lawmakers have turned a blind eye to wasteful government spending. He also wants his colleagues to wake up to the problem.

“My hope for fellow legislators is that they’ll see a set of solutions on how to actually fix this, that this is not just a book about complaining about waste in government, but it’s a book about … a set of alternatives,’’ Lankford said. “If you have a different way, bring it, but at the end of the day, we need to fix this, and we can’t just ignore it.”