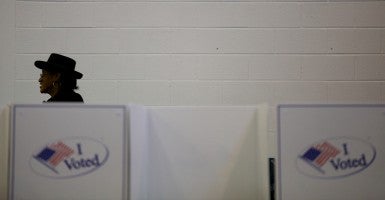 Yes, according to Old Dominion University Professors Jesse Richman and David Earnest, who wrote an article for The Washington Post highlighting their findings:

Most non-citizens do not register, let alone vote. But enough do that their participation can change the outcome of close races.

Because non-citizens tended to favor Democrats (Obama won more than 80 percent of the votes of non-citizens in the 2008 Cooperative Congressional Election Study sample), we find that this participation was large enough to plausibly account for Democratic victories in a few close elections.

Sen. Al Franken (D-Minn.) won election in 2008 with a victory margin of 312 votes. Votes cast by just 0.65 percent of Minnesota non-citizens could account for this margin. It is also possible that non-citizen votes were responsible for Obama’s 2008 victory in North Carolina. Obama won the state by 14,177 votes, so a turnout by 5.1 percent of North Carolina’s adult non-citizens would have provided this victory margin.

The professors acknowledge that there are “limitations” to their research and that they are “much more confident” non-citizen votes were a factor in Minnesota than they were in North Carolina.  But the overall evidence points to the fact than non-citizens have had an impact on the outcome of some of our elections.

Unfortunately,  President Obama seems poised to give amnesty to millions of illegal immigrants through executive order after the election. It’s hard to imagine how giving legal status to millions of people who are here illegally will not make the problem of voter fraud worse.

There are numerous reasons to be both outraged and concerned about Obama’s plan to go around Congress before year’s end, wielding his phone and pen strategy, to give amnesty.

To start, the fact he isn’t taking action until after the election shows that he is isn’t just bypassing lawmakers, but also the American people.  Obama well knows the majority of Americans oppose amnesty.  Were he to take action now, voters would have the opportunity to show their opposition by voting against members of his party who are up for election.

But snubbing the Constitution and voters is just the beginning.

According to news reports, a draft proposal from U.S. Citizenship and Immigration Services indicates the agency is looking for a private vendor that has the capacity to produce 30 million work permits and green cards over the next five years–and they’d like them to be ready to produce 9 million such documents in the first year alone.  How much of this “preparation” is needed to fulfill whatever Obama does through an executive order on amnesty is unknown, but we can be fairly sure its part of the calculation.

Such a move is fraught with economic and security concerns.  Is the president, who is so concerned about raising the minimum wage, not the least bit concerned about how a flood of low-skill workers would affect the U.S. economy and many of the very American citizens he says he wants to help move up the economic ladder?  Is he willing to ignore the huge burden amnesty will place on American taxpayers?

And considering we appear to have very little control over our borders, with tens of thousands of people flooding the southern border earlier this year, and that the Obama administration has trouble even deporting criminals who are here illegally, Americans are right to be concerned about their safety and security.

No wonder Obama doesn’t want to talk about any of this prior to next week’s elections.